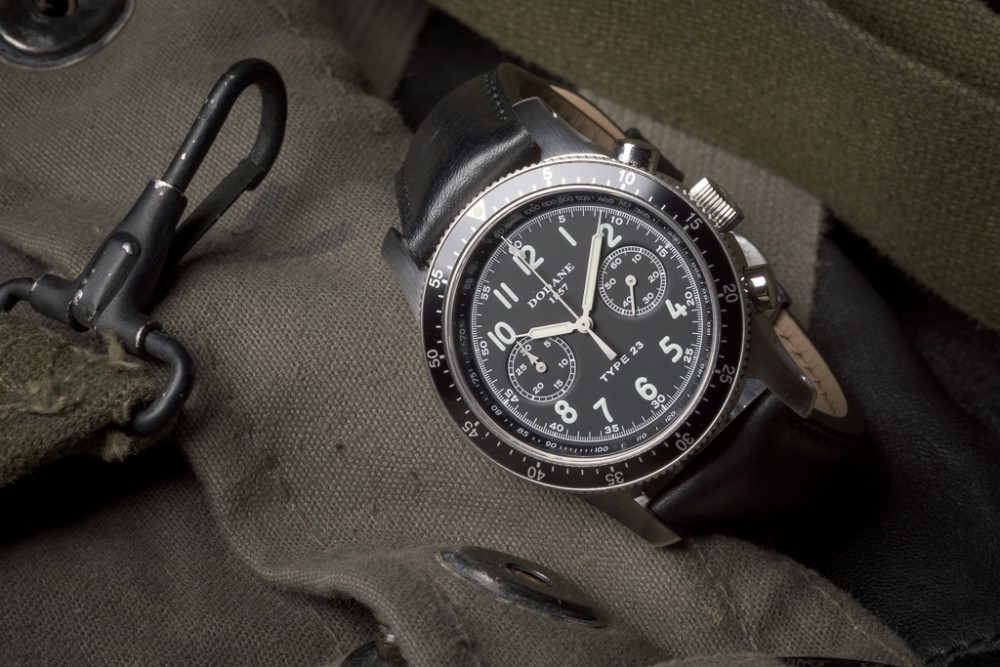 Dodane has a long colorful history in aviation chronographs and instrument manufacturing.  Dodane was founded by Alphonse Dodane and his father-in-law François-Xavier Joubert in 1857 in La Rasse, primarily to produce ébauches for other watch companies. 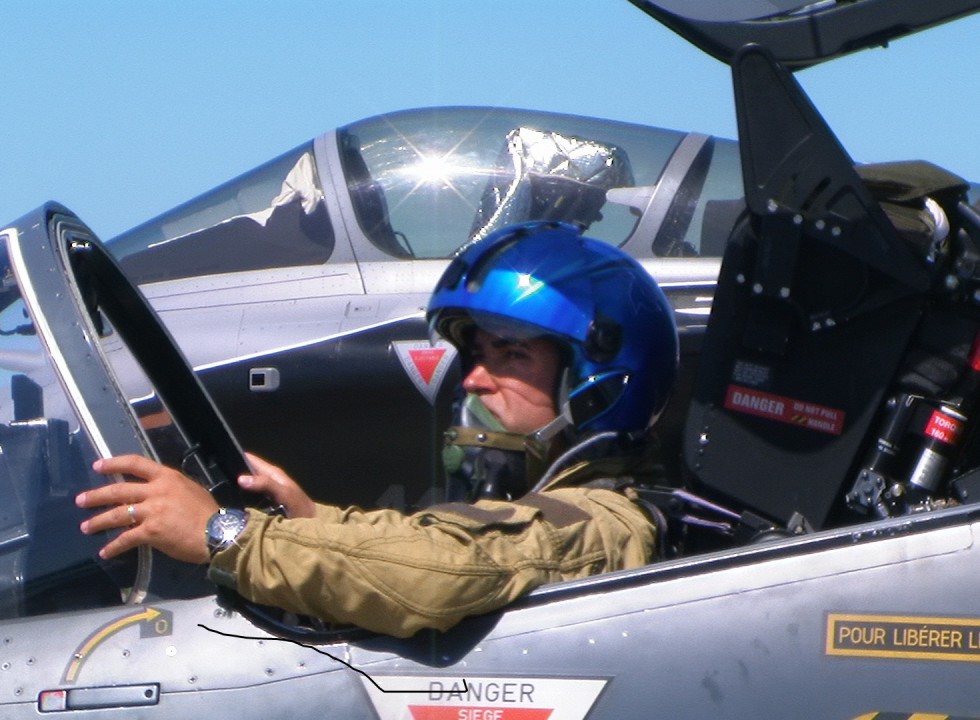 Prior to First World War, Dodane factory was relocated to Morteau to take advantage of its electricity and railroad for production and logistics.  Alphonse Gabriel Dodane (2nd generation) began to specialize in flyback chronographs and equipping the fighter jets with on-board chronograph. 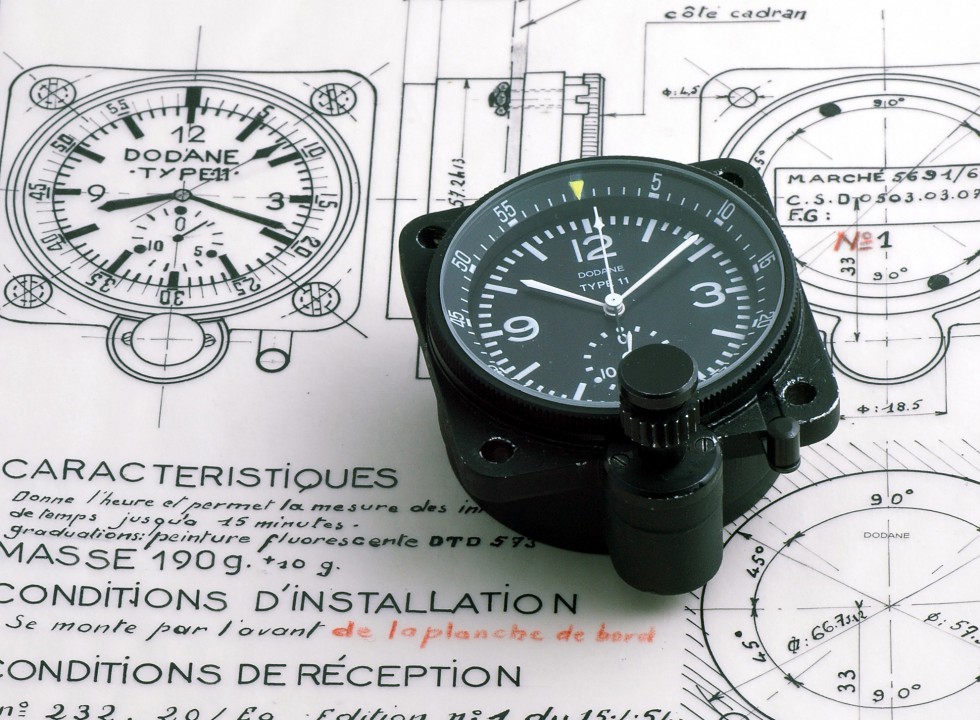 In 1929, Raymond Dodane (3rd generation) yet again relocated the factory to Besançon to pursue more traditional watchmaking.  Dodane became one of the approved suppliers to NATO. They manufactured approximately 5,000 Type 20 and Type 21 chronographs in 1950s to 1980s.  Auricoste, Breguet, and Vixa were also supplying similar Type XX watches in the same period. Dodane primarily used the Valjoux ébauche in its watches. 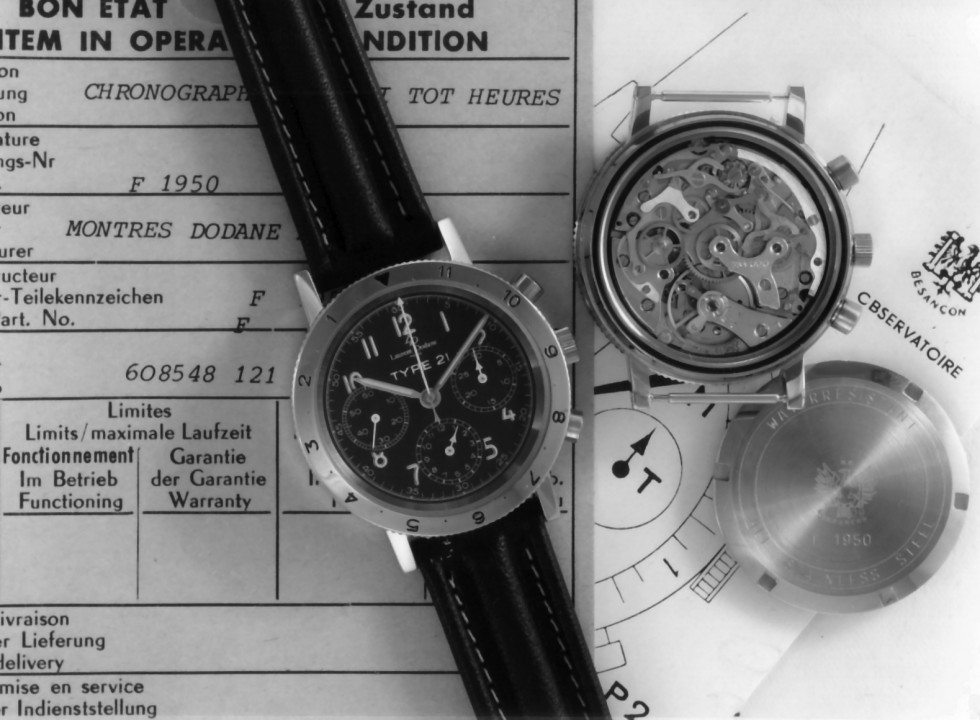 In the 1980s, Laurent and Michel Dodane (4th generation) produced up to 100,000 watches with distribution across the globe.   In 1983, the German Army commissioned Dodane to develop Type 211, a revolutionary integrated chronograph instrument that has since been used in the Tigre, Mirage 2000, and Rafale helicopters. 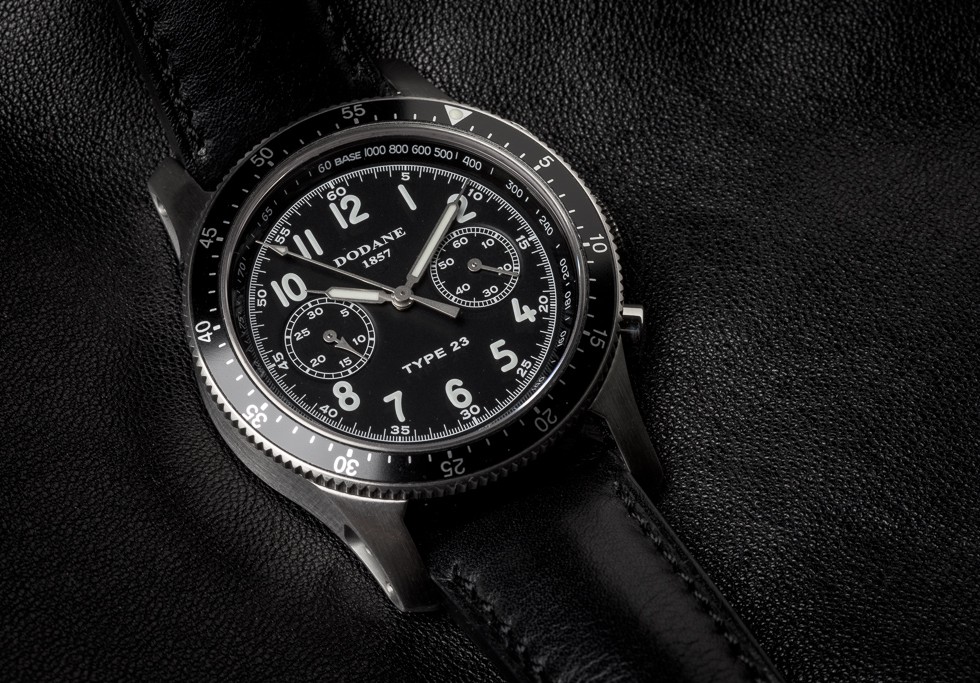 The company went into receivership in 1992 and was dissolved in 1994.  In early 2000’s, Cédric Dodane (5th generation) re-established business under the brand name Dodane 1857.  In 2005, Cédric produced Type 21, in the spirit of original Dodane, utilizing ETA 2892 with Dubois Dépraz chronograph module.  These watches became popular with aviation and watch enthusiasts.

In 2012, Cédric collaborated with designer Julien Thiebaud, a watch enthusiast himself, to create Type 23.  The stringent technical specification for the watch were provided by the French Ministry of Defense. 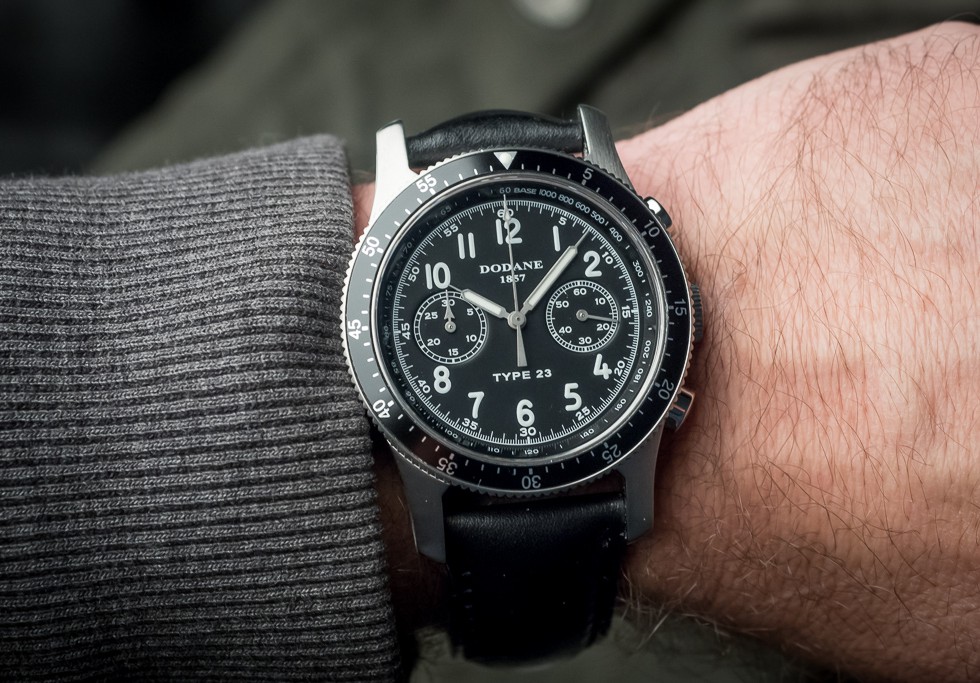 The 42.5mm case of Type 23 wears smaller on my average wrist due to the 13.9mm height.  It is meant to be a military sports watch, so I wore it with khakis and sweater rather than a suit.  Although, I do not see any problems with it fitting under the shirts’ cuff. 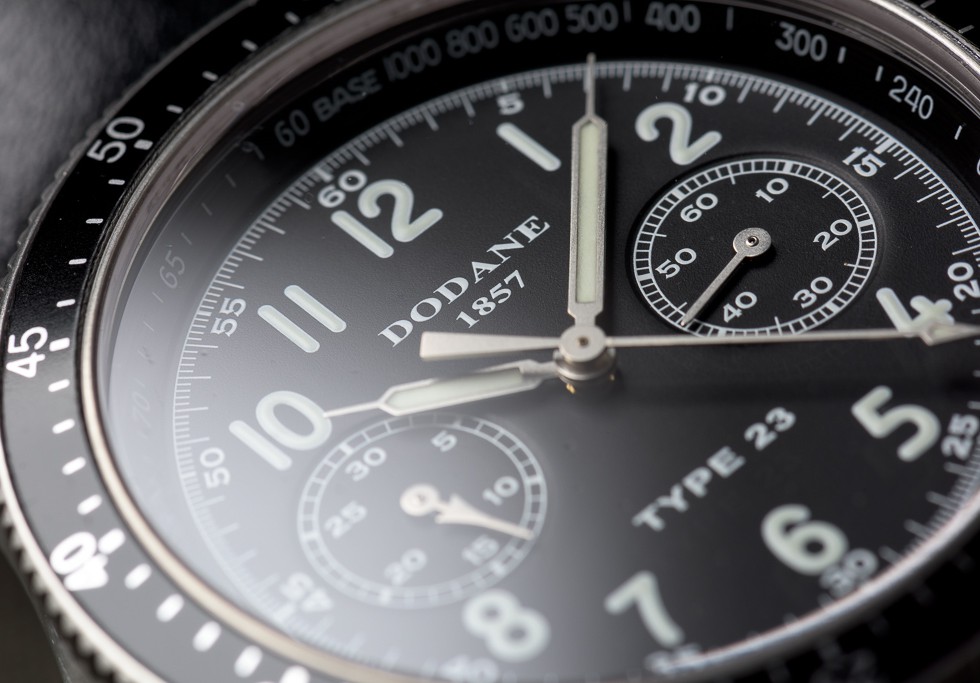 My Type 23 came with a 60-minute countdown, bi-directional, black anodized bezel for measuring the time between known waypoints.  Dodane also offers the 12-hour sliding scale in chrome, brushed, or black bezel finishing.  The lume on the triangle is fairly bright for navigation in low light.  The hollowed sides on the lugs for the screws is a nice touch – it is designed in the shape of an airplane wing.

The crown has a majestic eagle, which is the coat of arms for town of Besançon.  If I have a minor complaint, it is the recessed position of the crown in comparison to the pushers.  I understand that this is common with using the Dubois Dépraz chronograph module, but nevertheless it rests well past my wrist hair.  I should make it clear that the crown did not dig into my wrist, even after extended wear.  The chronograph pushers are very responsive when engaged.

Type 23 dial is laid out well and it is very easy to read the time with just a glance.  I personally like the bi-compax dial as they present a better symmetry and I spend less time deciphering the functions.  The two chronograph registers on this dial read the minutes and seconds.  The flyback function worked accurately by engaging the pusher at 4’o clock.

Dodane used a generous amount of C3 lume on the hands and numerals.  Even the tip of the seconds hand has good amount of lume to make use of tachymeter scale in low light.  The tachymeter scale is placed at a very good angle which gives the dial a substantial depth.  This also makes it easier to use the complications in-flight.  The crystal has anti-reflective coating, and my watch had open case back, which also had the anti-reflective coating. 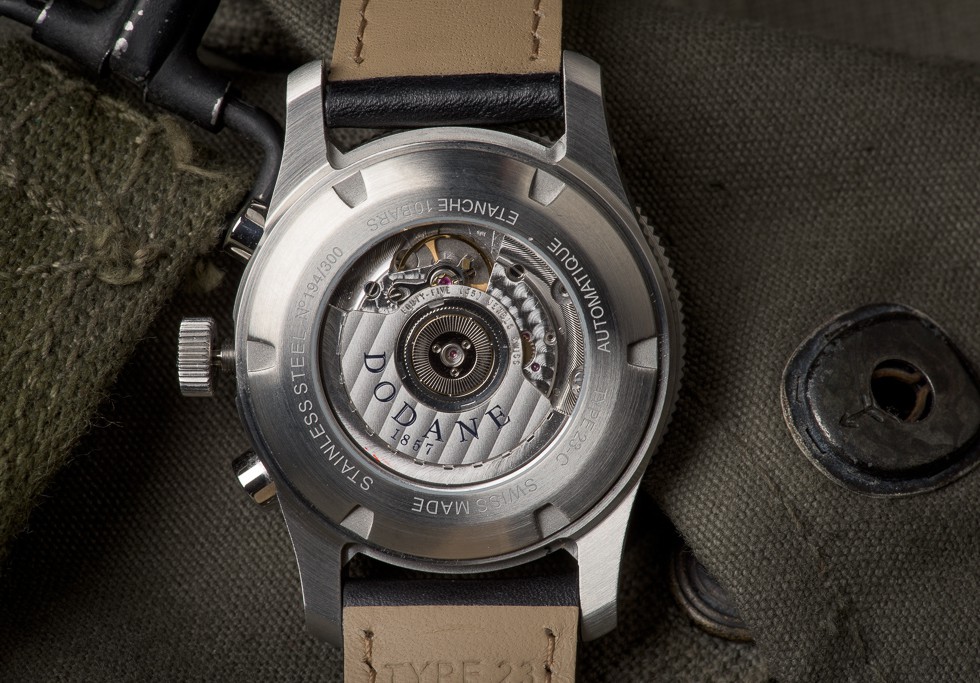 Type 23 is powered by ETA 2892 “Chronometer” movement with Dubois Dépraz flyback module.  It also has the stop-seconds feature, also known as “hacking” function.  Power reserve is good for 42 hours.  Incabloc shock protection system is standard on the ETA “Top” and “Chronometer” movement.  Dodane also offers an option to receive a chronometer certificate from the Besançon Astronomical Observatory.  The uniqueness of this certification lies in the fact that it applies only to a fully assembled watch unlike its Swiss counterpart, the COSC that merely tests non-cased movements. When a watch passes the Observatory’s stringent tests, it becomes certified as an Observatory Chronometer and receives a ‘Bulletin de Marche’ from the Observatory, confirming the performance of the movement in the actual watch itself. 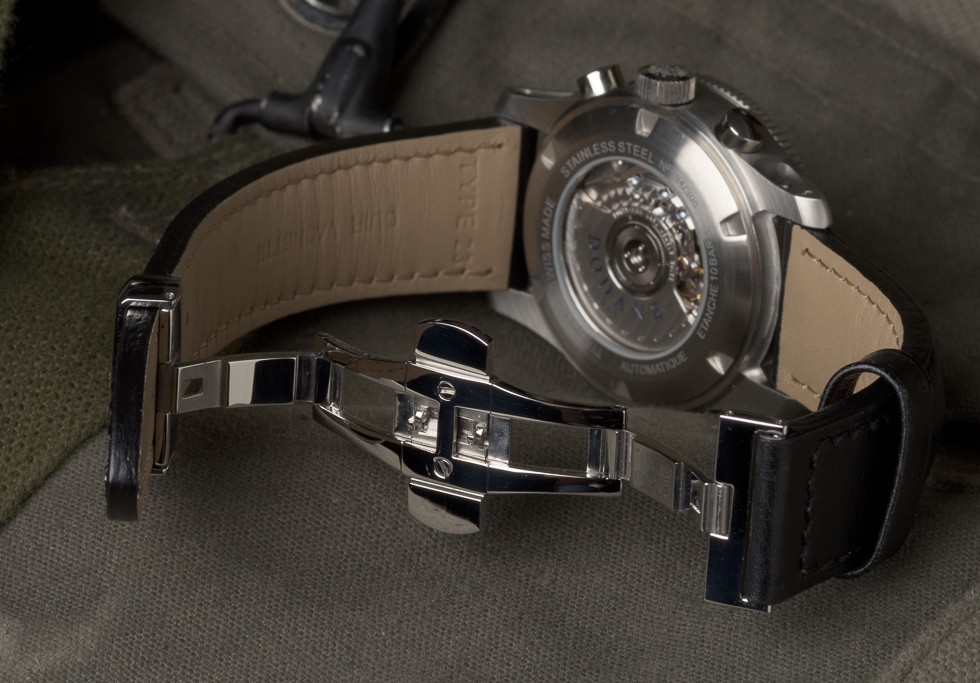 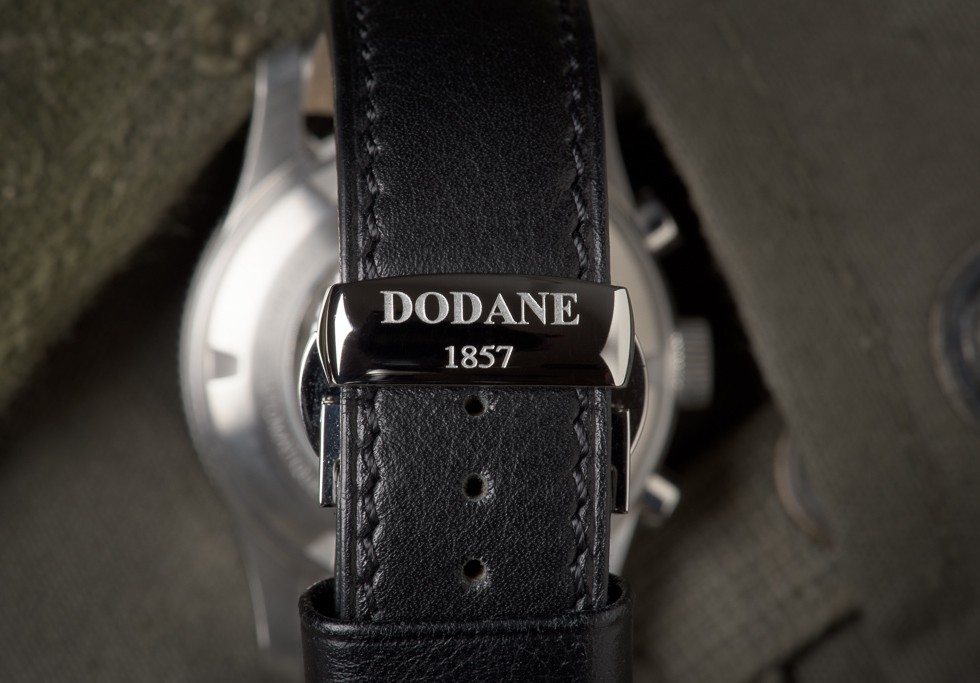 The strap was a comfortable calf leather in black with a deployant clasp.  The deployant is straight forward with double push-button clasp.  The buckle is signed with Dodane 1857.  This watch retails for $4,750 and the non-flyback with solid case back retails for $3,550.

You can visit Dodane website for more information, and if you are in U.S., you can visit and order directly from Totally Worth It