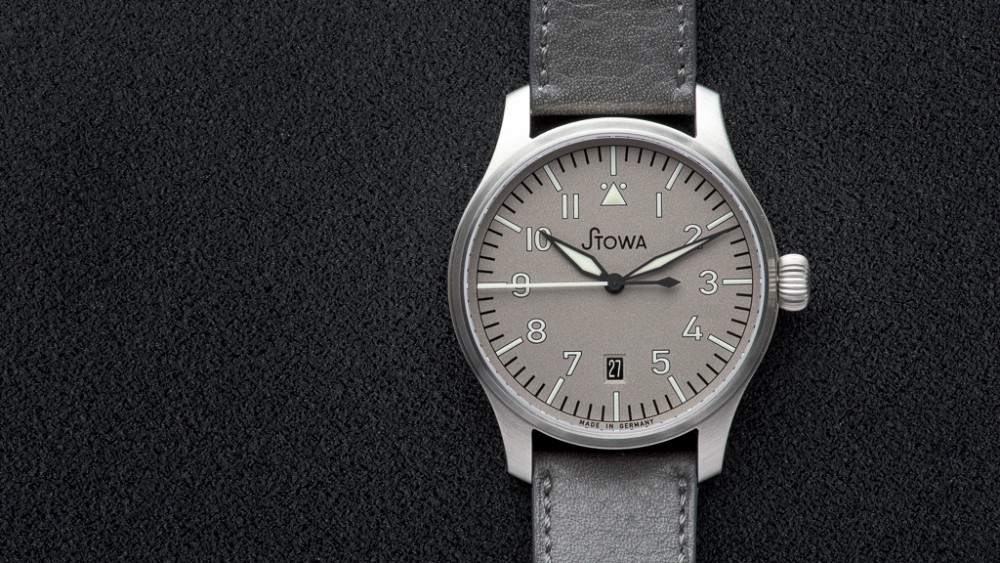 When I first visited Stowa in 2007, I was fascinated by Stowa Ikarus because it immediately caught my attention with the familiar look of classic pilots but it had this hypnotizing grey dial.  However, I ended up ordering a regular flieger with black dial.  Ikarus remained on my mind for several years, but for one reason or another (in pursuit of other watches), the dream remained unfulfilled. In 2015, the dream was realized. As they say, most of the times reality can be less exciting than the dream, well it is not the case here. Ikarus far surpassed my expectations in terms of aesthetics, quality, and comfort. 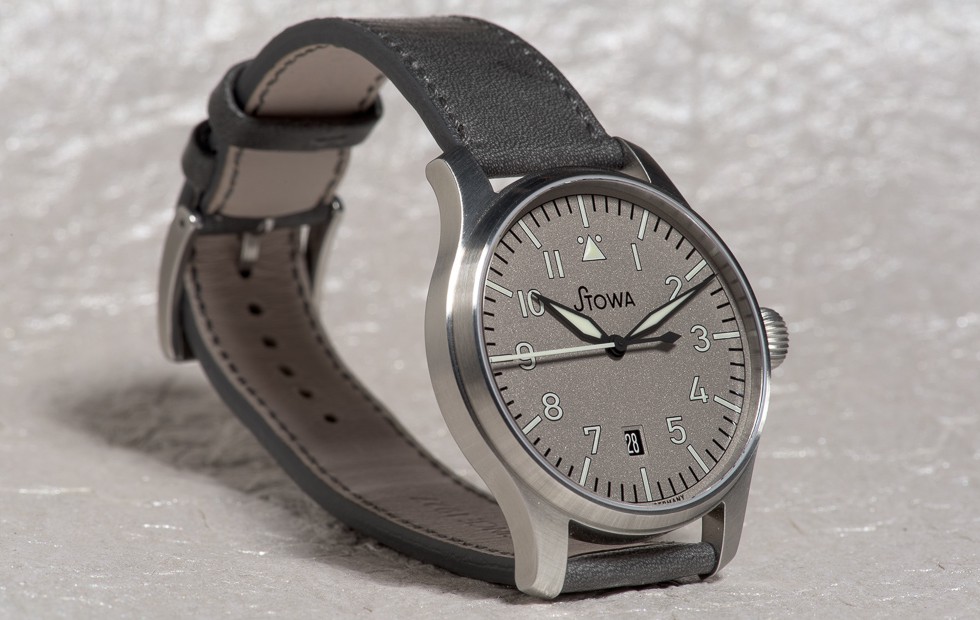 I opted to go with the older Stowa logo as few pieces of older dials were available.  There has been some controversy since Stowa changed its logo in 2013, but I did not have any issues with the new logo on Ikarus.  I wanted the old logo as that’s how I remembered seeing the watch in 2007.  To be fair, some of my colleagues preferred the bigger font of the older logo because the dial appears more balanced with it than the new logo. 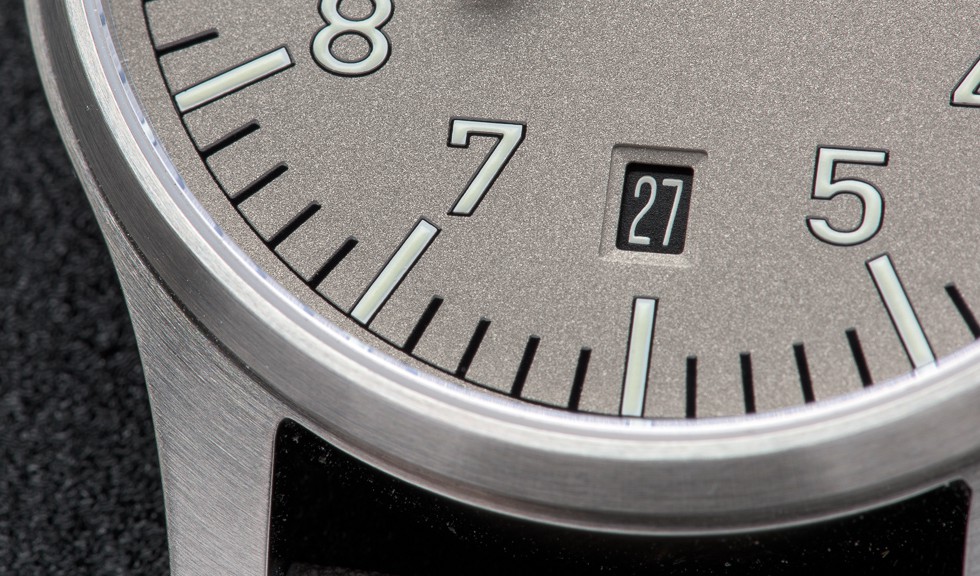 The dial of Ikarus is what sets it apart from other flieger watches.  It is not a traditional color for a pilots’ watch, yet the grey dial has a modern appeal.  The metallic grey color on this dial is achieved by galvanization process.  This dial is best observed under the sunlight (or bright light) as it shines and comes alive in almost a radiant silver color.  The contrast with the white Arabic numerals, white hands, and black sub-minute markers works well on this dial.  The date adds to the modern interpretation of this watch since date is not traditional feature of a flieger watch.  The white date is on a black wheel to make it more legible. 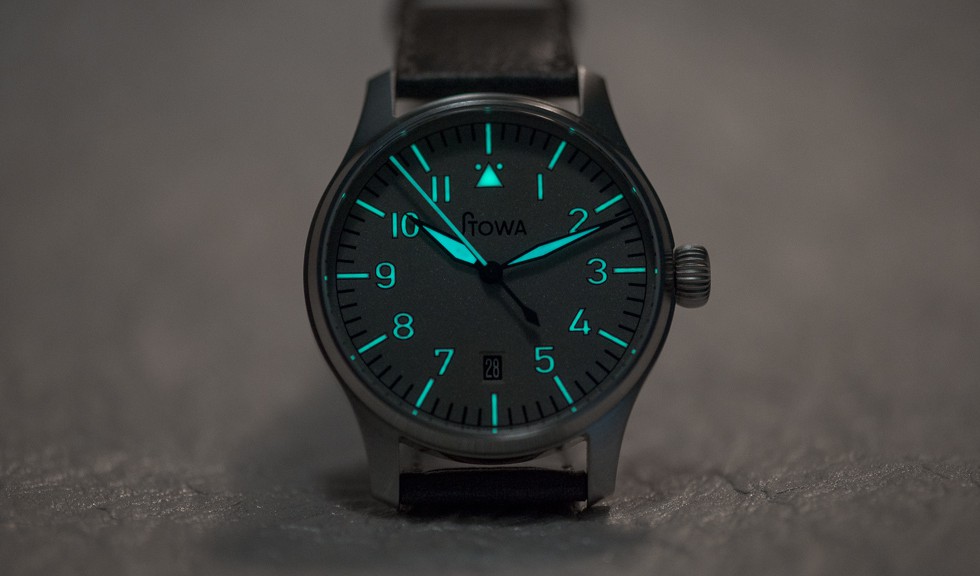 The C3 lume is sublime as Stowa generously applies the white lume on the numerals, markers, hands, and the triangle with dots.  Why is there a triangle with dots?  The triangle with dots actually represents the 12’o clock on a flieger, which made it easier for the pilots or navigators to tell the 12’c clock position in dark and without the proper orientation of the horizon. 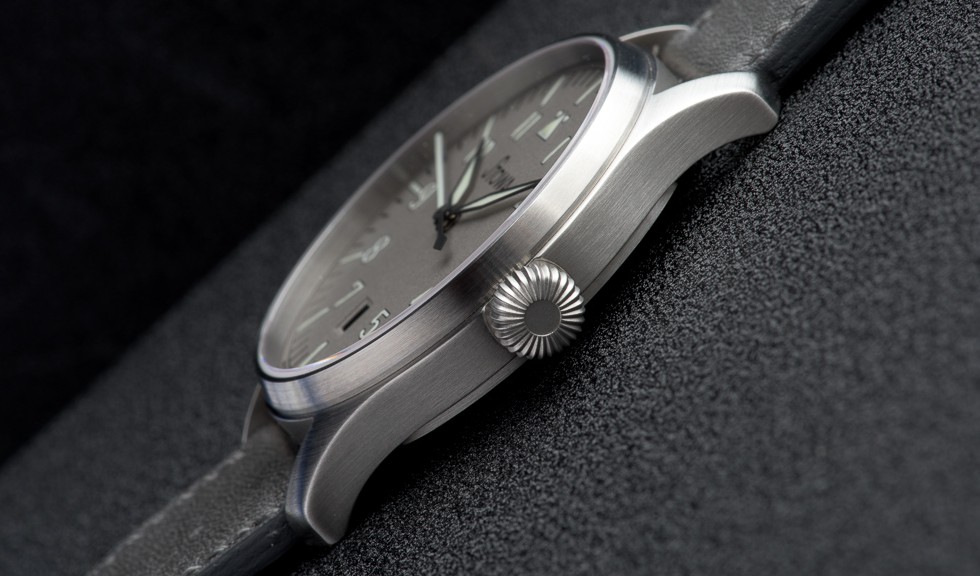 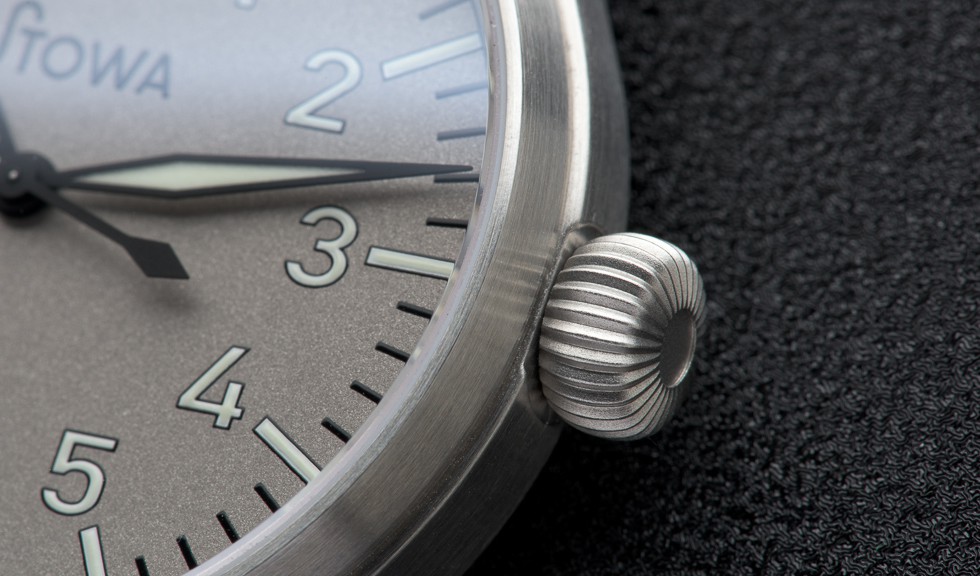 The 40mm stainless steel case is brushed and grinded with hand.  The onion crown is easy to operate and is proportional to the size of the case.  The sapphire crystal on the dial is slightly domed and flat on the case back.  The height of the case is 10.20mm.  The lugs are fairly flat and fit a 20mm strap.  I love the grey strap it came with.  It matches the dial and is neutral color which can be worn with most of the clothing. 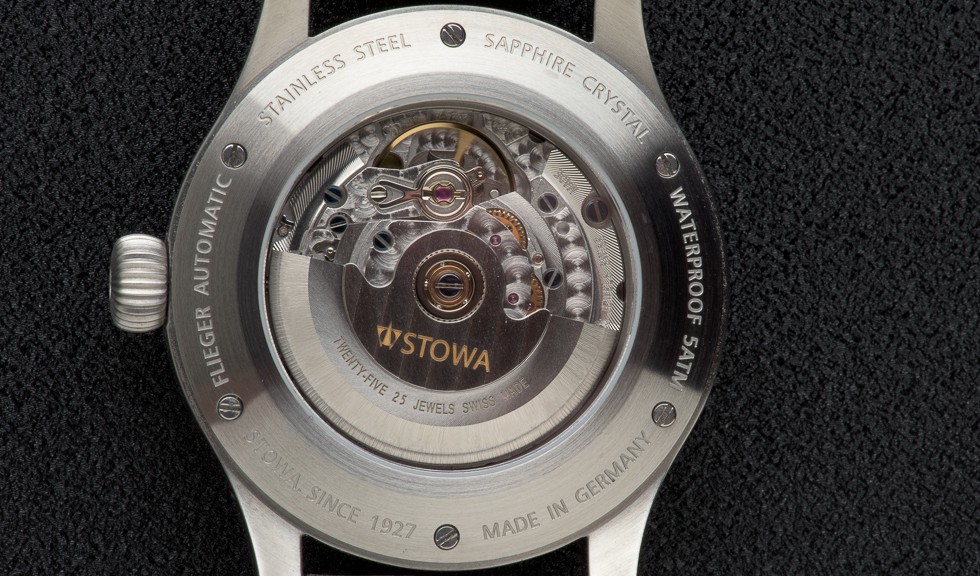 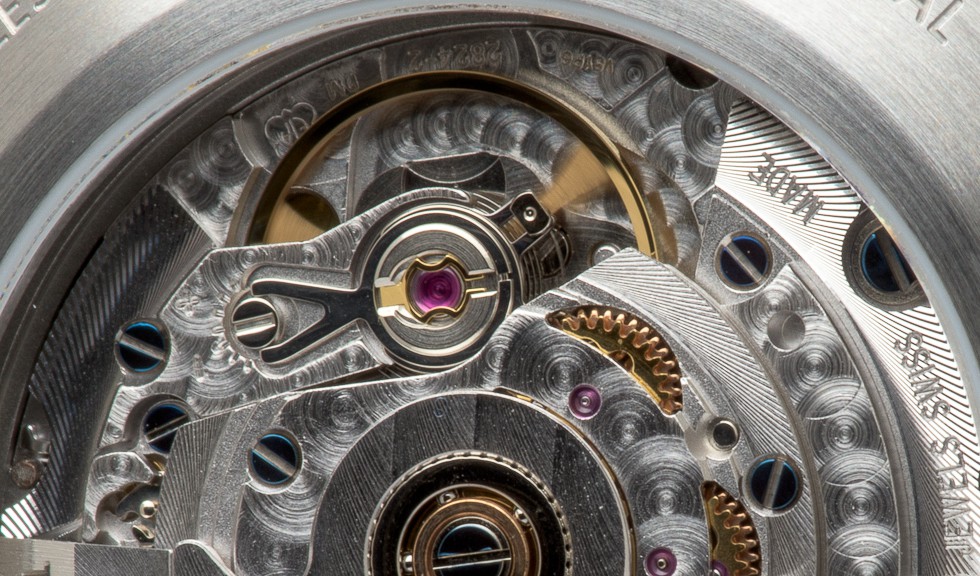 Stowa uses the workhorse ETA 2824-2 movement to power the Ikarus.  I selected the ETA Top grade with blue screws for this watch.  You can select the ETA BASIC grade as an option as well, which further reduces the cost of the watch.  It has a power reserve of 40 hours.  Stowa also offers engraving of rotor for a small fee, which is nice touch for special occasion or giving as a gift. 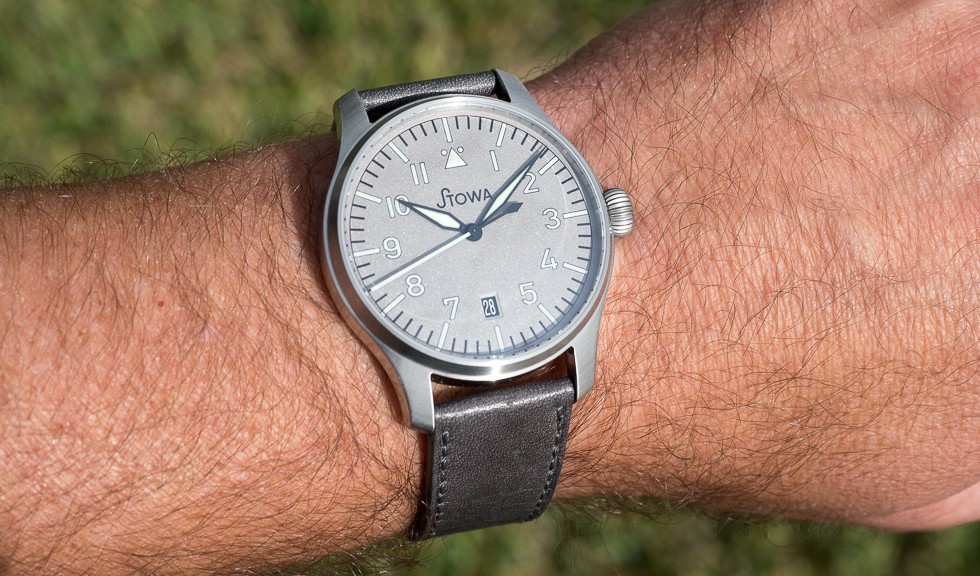 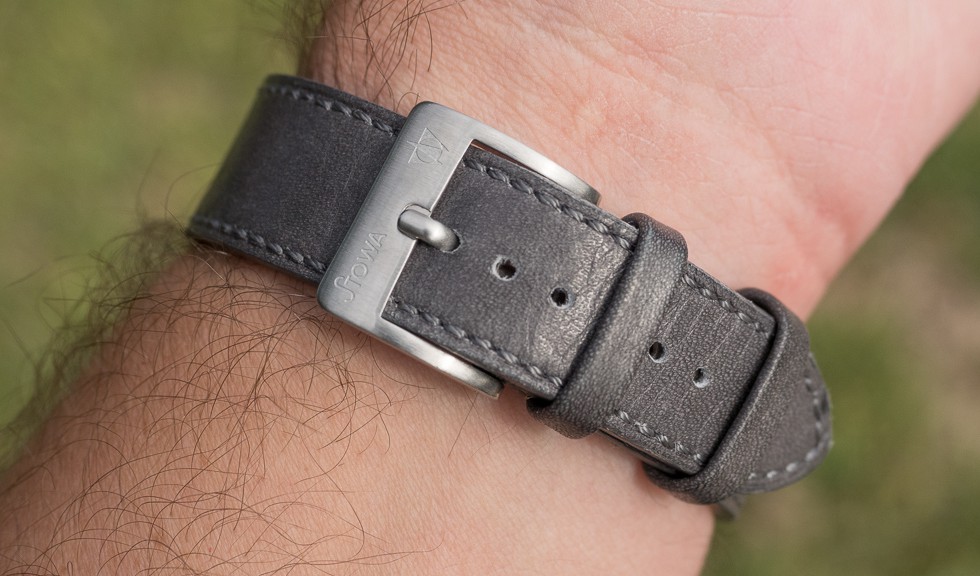 Recently Stowa also announced an Ikarus Classik Sport in 43mm case, which I write about in coming months.  The Ikarus Flieger Classic can be purchased directly from Stowa for approximately $700 USD.  Here I can state that this watch is definitely worth the money given the attention to detail and features.

Photography credit go to Scott Sitkiewitz.  No mythical characters were harmed during this photoshoot.