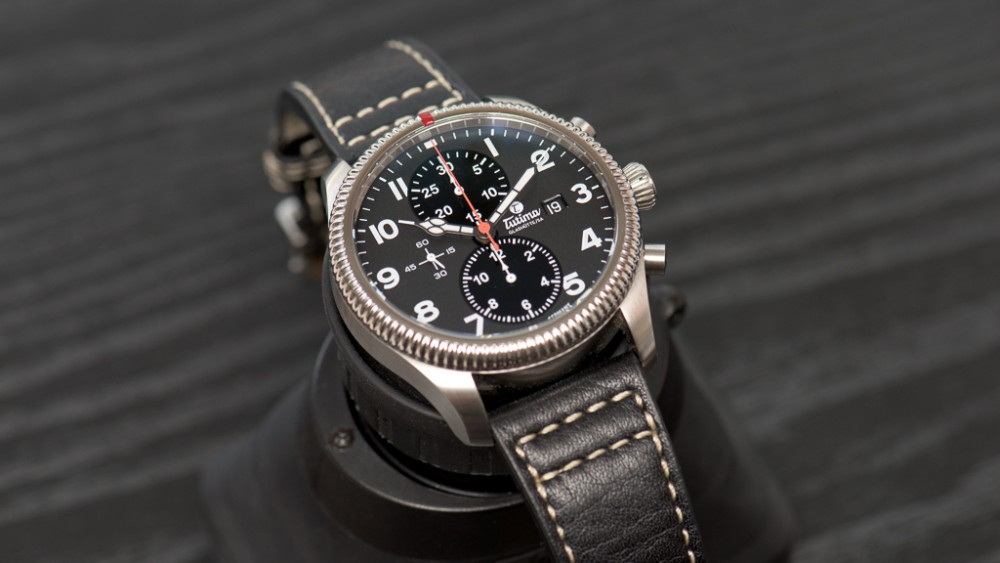 Tutima as a brand does not have a familiar history as other legendary Swiss and German brands.  The only familiar story is the consequence of two World Wars, which had a profound effect on the German watch industry.  There was innovation in military watches, misappropriation of factories for producing military parts, and ultimately bankruptcies due to the post-war economic crisis.

After WWI, there was a severe economic crisis in the Glashütte region.  In 1927, a young attorney by the name of Dr. Ernst Kurtz, was requested by a Saxony bank to manage the crisis in Glashütte.  Dr. Kurtz established two companies, Uhren-Rohwerke-Fabrik Glashütte AG (UROFA) and Uhrenfabrik Glashütte AG (UFAG).  UROFA-UFAG produced ebauches and pocket watches at first, and then wrist watches later, to better compete with the Swiss watch industry. 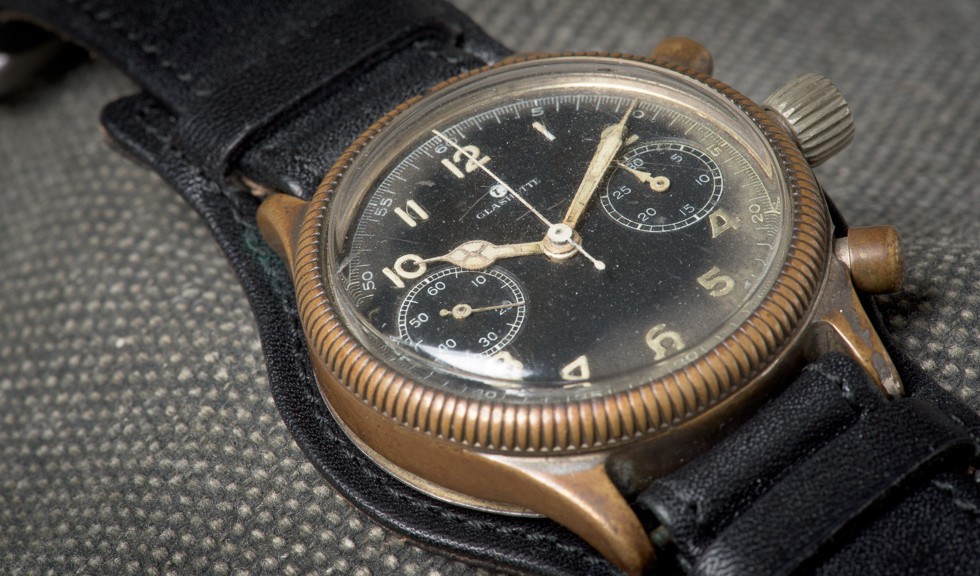 In 1939/1940, under the management of Dr. Kurtz, the first German two-pusher flyback chronograph was manufactured (calibre 59).   This chronograph was sold under the name “Tutima.”  Tutima is derived from the Latin word “Tutus” which means “safe” or “protected.”  These chronographs were produced for the German government.  As WWII ended, the factories in Glashütte were destroyed.  As part of war reparations, machines, parts, and operations of UROFA-UFAG were taken to Russia.  Russians produced these chronographs for some time. 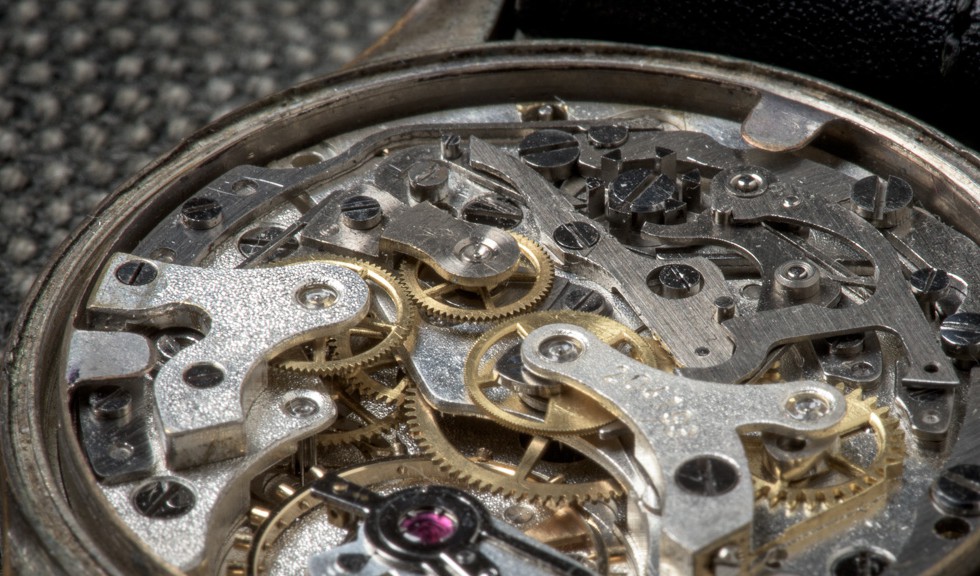 However, after the war ended, Dr. Kurtz continued to produce watches in Bavarian town of Memmelsdorf with the help of former employees from Glashütte. By 1949, a range of new developments already included the fine 11½-line traditional Kurtz 25 caliber. It was outfitted with sophisticated Breguet hairspring, jewels set in chatons, and a “super shock resist” system. He manufactured under the name “Uhrenfabrik Kurtz” during the difficult postwar years.

In 1951, Dr. Ernst Kurtz transferred production to back to Lower Saxony, in the town of Ganderkesee.  The factory was again named UROFA.  Then the company was renamed Norddeutsche Uhren-Rohwerkefabrik (NUROFA).  In 1958-1959, NUROFA produced approximately 70,000 Calibre 570 ebauches.  Dr. Kurtz also setup the company “Tutima Uhren” to market the watches housing this movement. 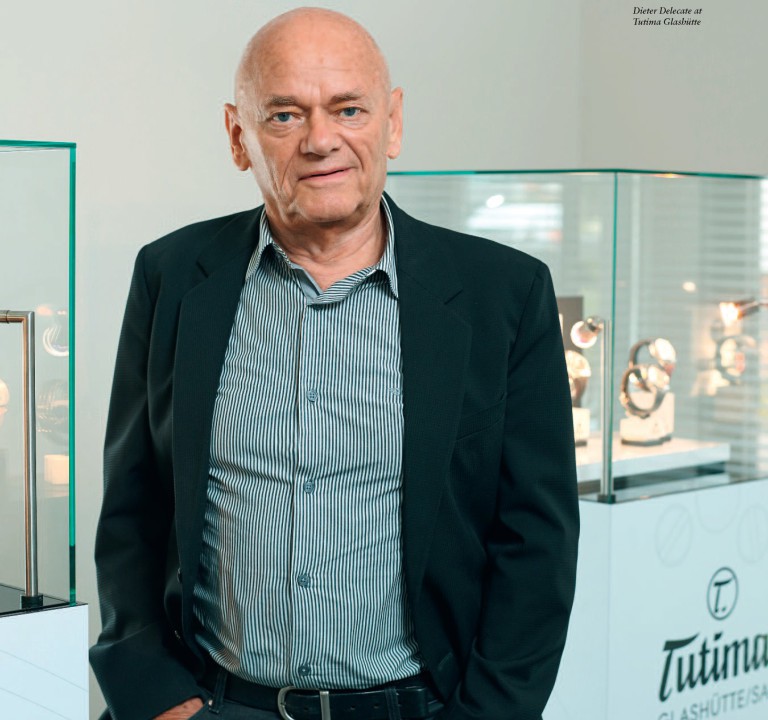 The 1940’s Tutima Flieger Chronograph with calibre 59 was housed in a nickel-plated brass case with screw-down case back, to ensure that the manually wound movement was safely protected against damage.  The lumed numerals and hands ensured excellent contrast and superb legibility, while the coin-edge rotating bezel with its unique red reference marker enabled precise times to be set for the pilots/navigators. 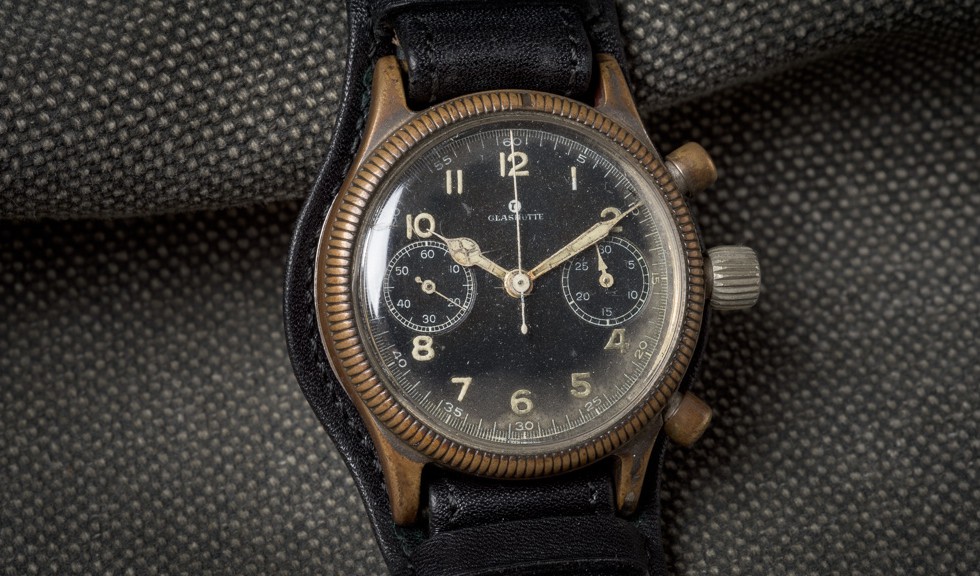 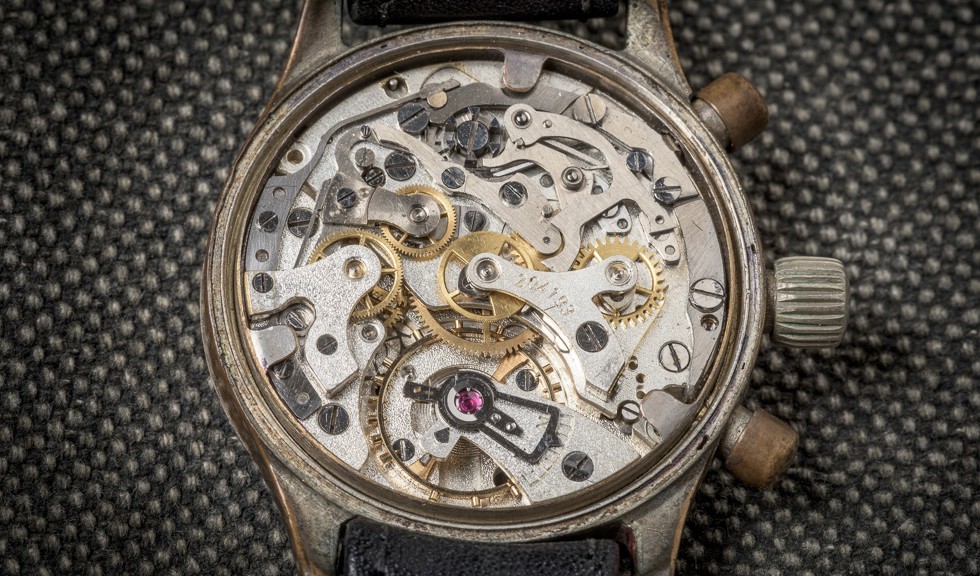 UROFA-UFAG produced approximately 30,000 of the Tutima Flieger Chronograph, which are now much sought after collectors’ items.

The first replica of 1941 Flieger was the Classic Edition and later became Grand Classic line, and now the Grand Flieger. The Classic Edition was the closest reproduction of the original, while incorporating the benefits of modern technology and contemporary materials. 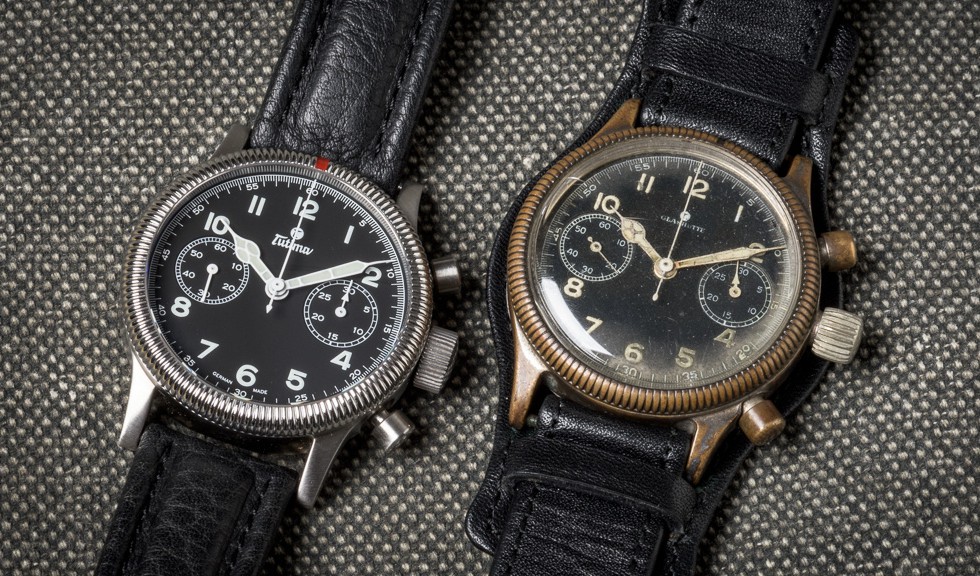 The Classic Flieger Chronograph is powered by Swiss Valjoux Caliber 7760, which was specially modified for this model. The original nickel-plated case has been replaced by a stainless steel variation fitted with a convex sapphire crystal, and the case, hands, and dial are a close reproduction to the original. Its case diameter of 38.5 mm is equivalent to the size of the original. 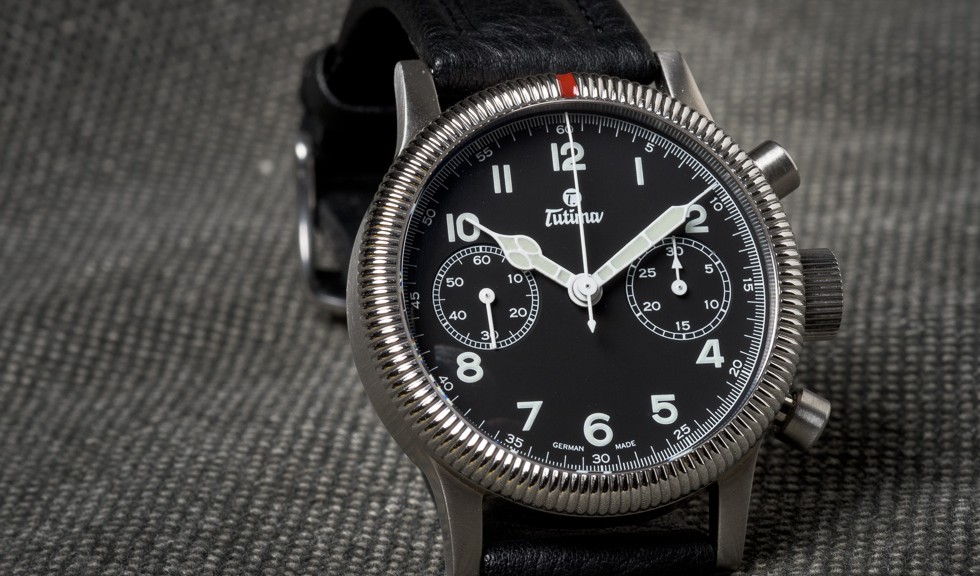 The case comes in satin-finished stainless steel. It is water-resistant to 10 bar. The bezel is bidirectional-rotating bezel with red reference marker. The domed sapphire crystal has anti-reflective coating on the inside. The cathedral hands and the numerals use a bright Super-LumiNova compound. 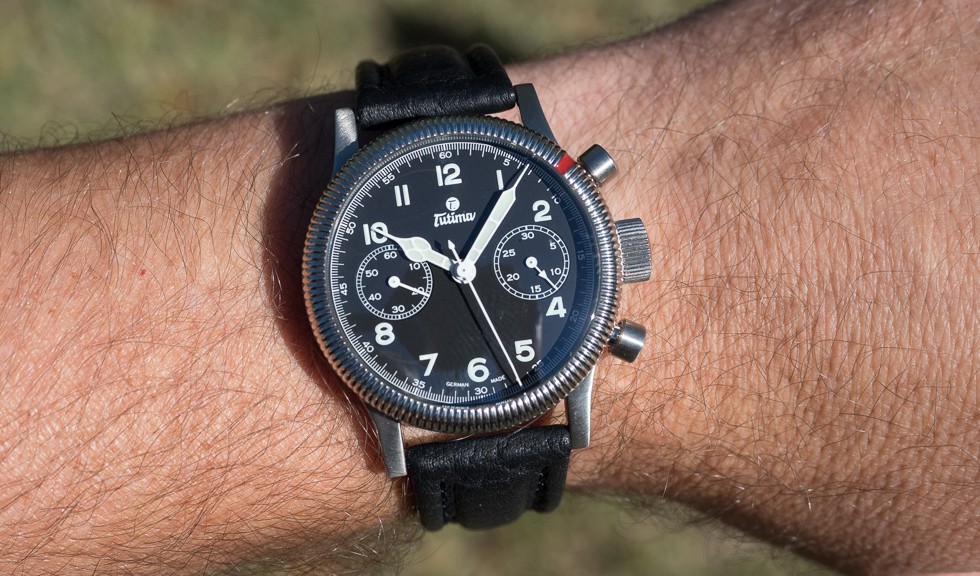 The Classic Flieger Chronograph is powered by modified, hand-winding Valjoux Caliber 7760.  It has chronograph with 30-minute and 60-second counters, subsidiary seconds.

Tutima made a full circle by returning to Glashütte in 2008.  Finally, the Grand Classic flieger chronograph was introduced in 2013. 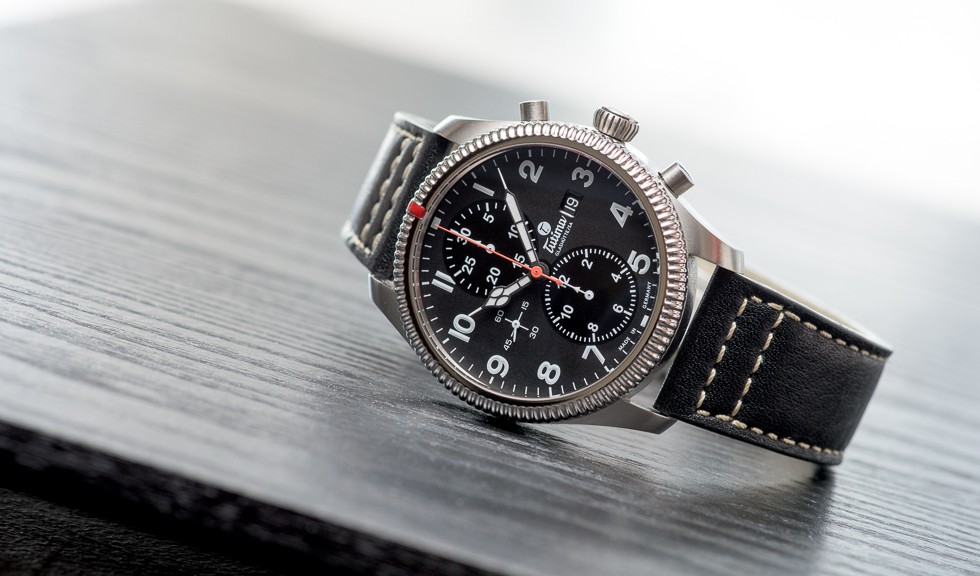 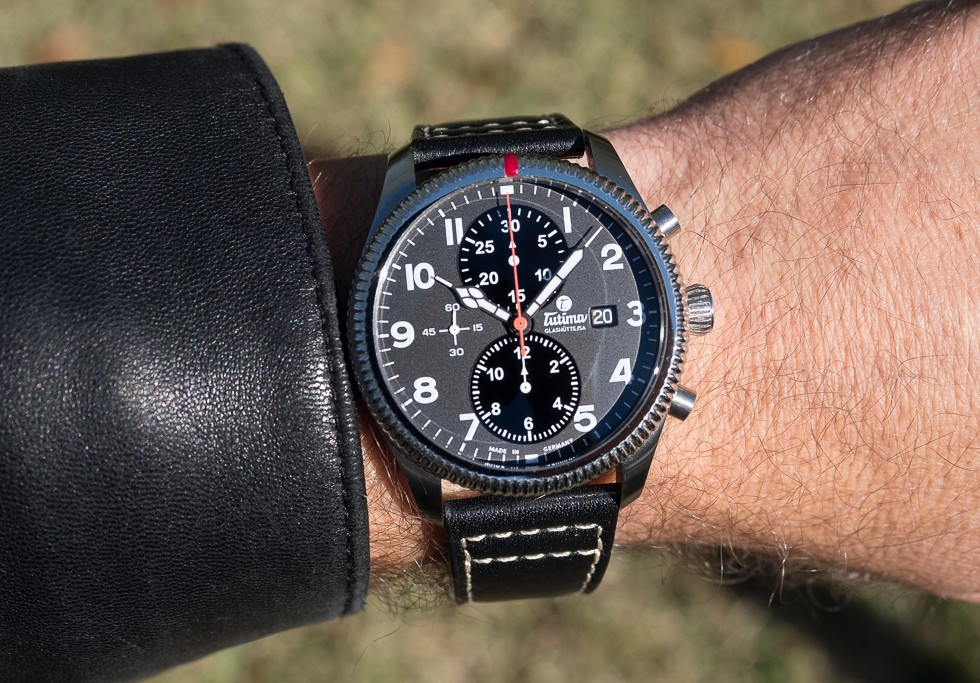 The cathedral hands, the coin-edge stainless steel case, and the rotating bezel with red reference mark still remain familiar as a tribute to the 1941 Flieger.  However, the Grand Flieger now has a much larger 43 mm case, outfitted with a modified Valjoux 7750 automatic movement (replaces Valjoux 7760 of Classic Flieger), screw-down crown, and has a domed sapphire crystal that is anti-reflective on both sides. 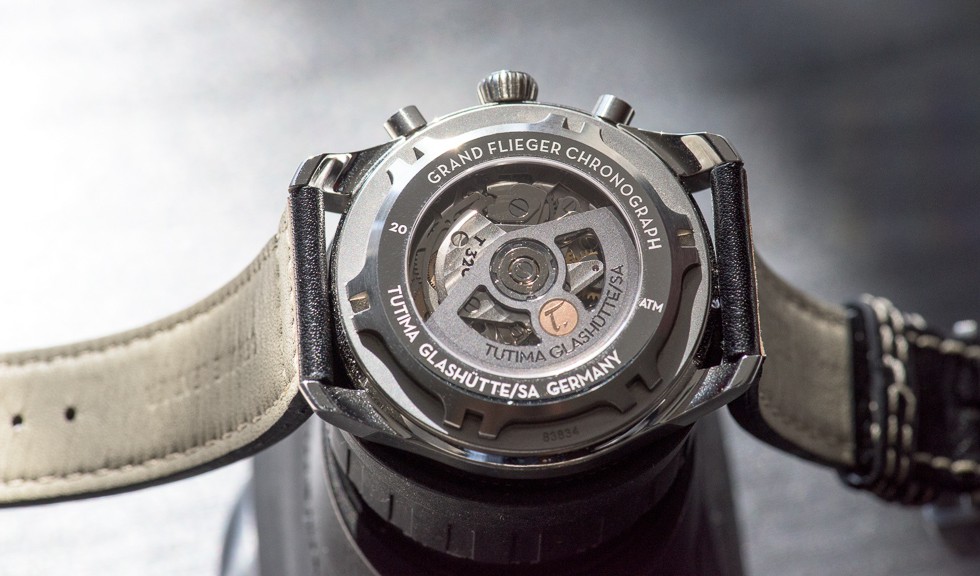 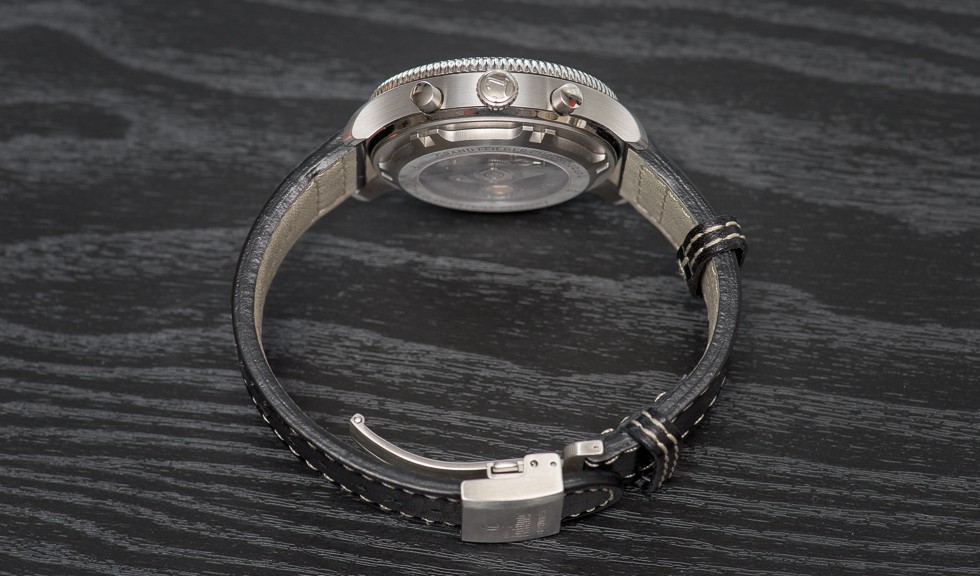 The Grand Flieger is DIN 8319 certified.  This is a far better certification than the COSC certification.  In an independent facility, governed by the State department of weights and measurements of Saxony (SLME) and Thuringia (LMET) and in accordance with German DIN standards, each fully finished chronograph must pass a 15-day timing and climate test, to earn its title as a Certified Chronometer.  “Chronometer” is a special classification issued to highly accurate watches like the ones developed for early maritime travel.  The test, performed in a controlled environment, evaluates the accuracy of each timepiece in 5 different positions with temperature variants ranging from 8-38 degrees Celsius and an average daily deviation allowance of -4 to +6 seconds for every 24 hours. Moreover, since the test is performed on timepieces that are fully assembled as they are delivered to the client, the results are far more relevant.

Grand Flieger Chronograph is presented with a Certified Chronometer certificate. 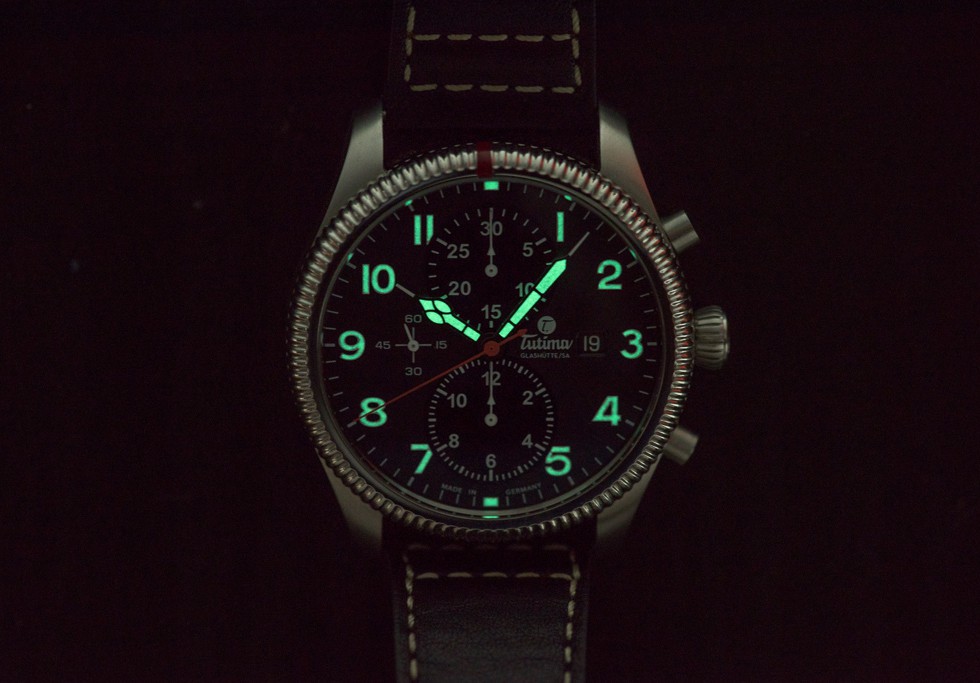 I enjoyed wearing both the Classic Flieger, as well as the new Grand Flieger.  Even with a larger 43mm case, the Grand Flieger is very comfortable to wear.  the dial is very clean and easy to read.