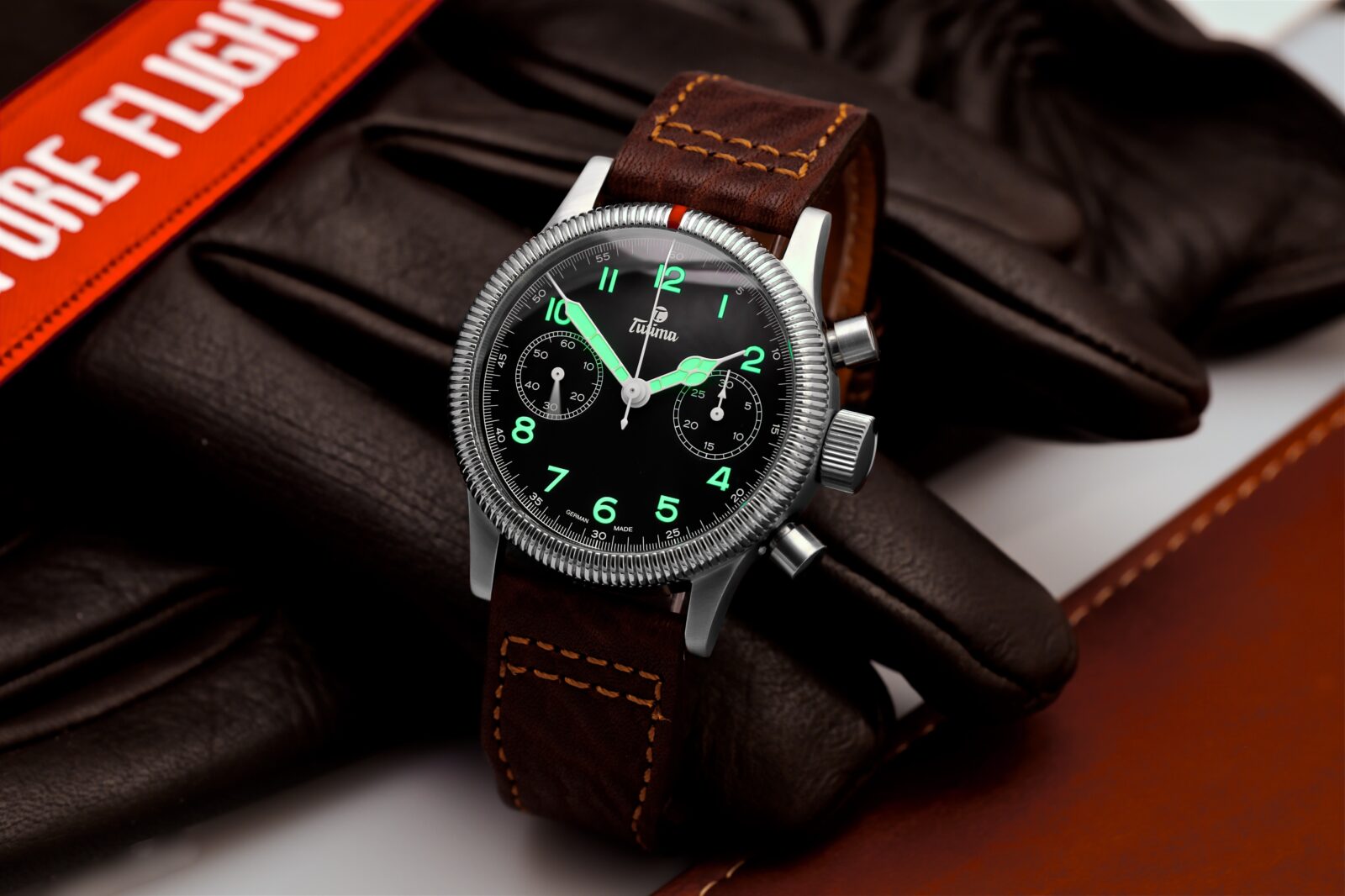 It has been nearly 80 years since Tutima launched its iconic pilot watch- the Flieger Chronograph- in 1941. Now a highly-prized item by watch collectors worldwide, Tutima introduces the “Flieger Friday Edition”, limited to only 25 pieces and inspired by the original historic model.

#FliegerFriday, a social media hashtag that continues to rise in popularity, to acknowledge the rapidly growing pilot watch enthusiasts and collectors worldwide who share their passion for Tutima’s Flieger collection online.

Tutima is known as the premier German pilot watchmaker.  In 1939, under the management of Dr. Kurtz, they manufactured the first German two-pusher flyback chronograph- Caliber 59.  This chronograph was sold under the name Tutima, which is derived from the Latin word Tutus, meaning “safe” or “protected.” This caliber later went on to be a key movement in the development of the Tutima Flieger collection. current reedition of the historical Tutima pilot’s chronograph.

These chronographs were produced for the German government.  As WWII ended, the factories in Glashütte – the city where Tutima was founded – were destroyed.

However, after the war ended, Dr. Kurtz continued to produce watches in Bavarian town of Memmelsdorf, later in Ganderkesee, Lower Saxony with the help of former employees from Glashütte. By 1949, a range of new developments already included the fine 11½-line traditional Kurtz 25 caliber. It was outfitted with sophisticated Breguet hairspring, jewels set in chatons, and a “super shock resist” system. He manufactured under the name “Uhrenfabrik Kurtz” during the difficult postwar years.

The 1940’s Tutima Flieger Chronograph with Caliber 59 quickly became an important representation of the brands capabilities. It was originally housed in a nickel-plated brass case with screw-down case back, to ensure that the manually wound movement was safely protected against damage.  The luminous numerals and hands ensured excellent contrast and superb legibility, while the fluted rotating bezel with its unique red reference marker enabled precise times to be set for the pilots/navigators while the large crown, found at 3 o’clock, made it easy to change the time.

The UROFA-UFAG produced approximately 30,000 of Tutima Flieger Chronographs and are now much sought-after collectors’ items.

Released by Tutima is the early 1990’s, the Classic Flieger Chronograph was the first re-issue of the 1941 model and incorporated the benefits of modern technology and contemporary materials. It was originally commissioned by a prominent Japanese watch collector, who approached Mr. Dieter Delecate, owner of Tutima, with the idea.

It took Tutima several years to develop and construct a new case in similar size, to modify a modern hand-wound movement for exact dial placement as the original, and to recreate the original dial fonts, hands, and fluted bezel. It was time well spent; the Classic Flieger Chronograph has long since become a legend thanks to its reliability and functionality and has remained in production for over two decades.

Similar to Reference 783-01, the case of the Flieger Friday chronograph comes in a 38.5 mm satin-finished stainless steel case, equivalent to the size of the original Flieger. Also like the original chronograph, the bi-directional, fluted, rotating bezel with red reference marker, remains an important design element in the watch. The large cathedral hands are designed to match the original, as is the dial, which features the Tutima logo and numerals in the watch’s original fonts.

In keeping with the times, the hands and numerals use a bright Super-LumiNova compound and features a domed sapphire crystal with anti-reflective coating for maximum legibility. The case back is also fitted with a sapphire crystal, and the watch is pressure tested to 10 atm (almost 340 feet depth).

The Flieger Friday Chronograph is powered by the hand-wound ETA Valjoux Caliber 7760, which is modified by Tutima to create a modern representation of Caliber 59. An eye-catching gold plated bridge and Tutima engraving are visible through the sapphire case back.

The limited-edition new member to the Flieger collection is presented with a handsome vintage pilot style leather strap. Each of the 25 editions are also individually numbered and engraved, and are accompanied with a printed certificate of authenticity.

The Flieger Friday Limited Edition can be ordered directly from Tutima here.