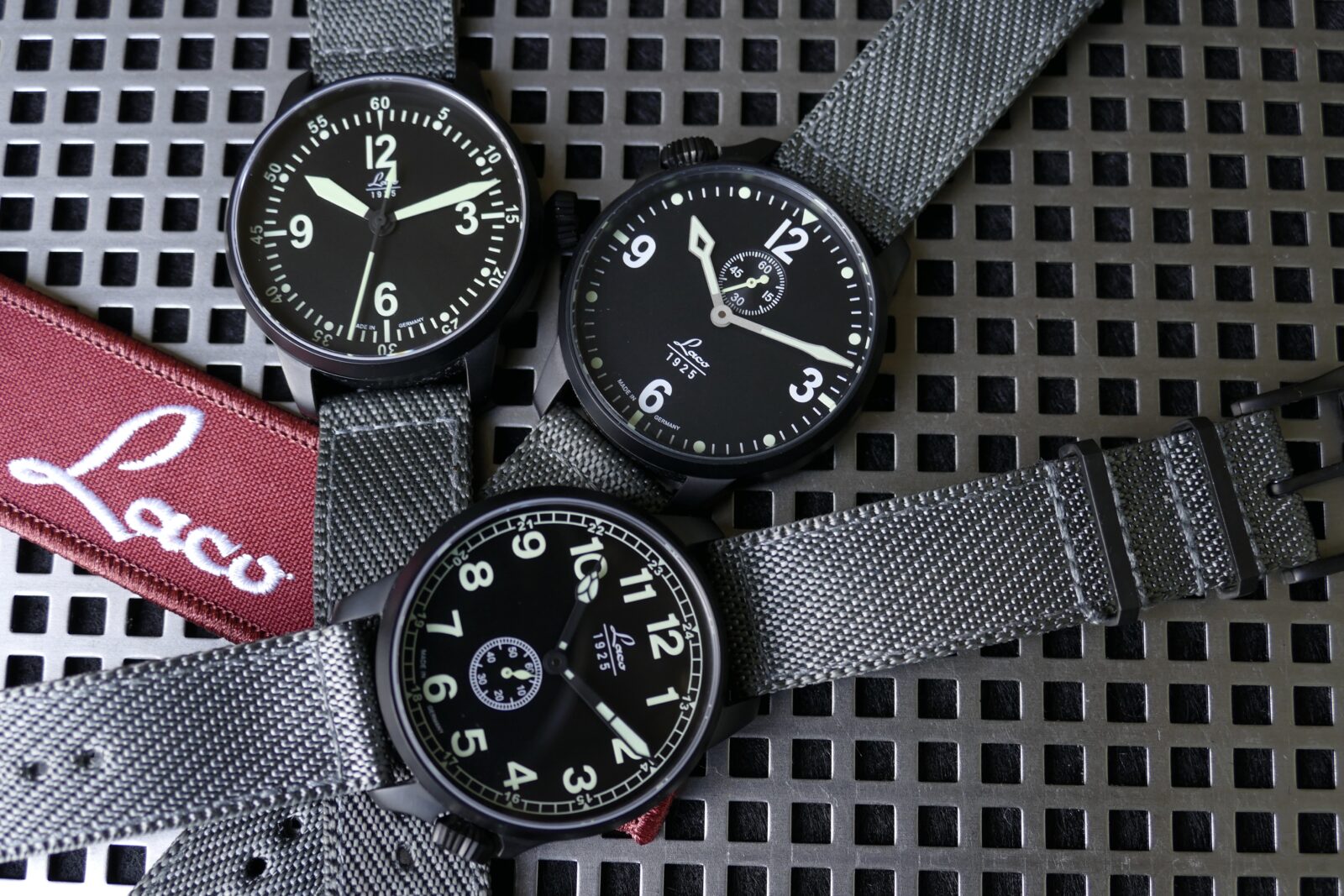 Three at a time – With the Laco Bell X-1, JU or Spirit of St. Louis on your wrist Laco transports you back to the pioneering days of contemporary aviation history (1927, 1930 and 1947).

Those three Laco watches combine contemporary flieger watch design and high legibility of the on-board instruments of the 1930s to -1950s.

All watches feature the almost same technical specs, two feature a small second, one is fitted with a central seconds hand:

The dial designs are inspired by the aircraft clocks of the mentioned aircrafts.

The Spirit of St. Louis (formally the Ryan NYP) is the custom-built, single-engine, single-seat, high-wing monoplane that was flown by Charles Lindbergh on May 20–21, 1927, on the first solo non-stop transatlantic flight from Long Island to Paris. Lindbergh took off in the Spirit from Roosevelt Airfield and landed 33 hours, 30 minutes later in Paris.

Officially known as the “Ryan NYP” (New York to Paris), themonoplane was designed by Donald A. Hall of Ryan Airlines and named the “Spirit of St. Louis” in honor of Lindbergh’s supporters from the St. Louis Raquette Club in his then hometown in Missouri.

The Junkers Ju 52 ( often nicknamed „Tante Ju“ – which would translate into”Aunt Ju” and „Iron Annie“ was a transport aircraft that was designed and manufactured by German aviation company Junkers.

The development of the Ju 52 commenced during 1930, headed by German aeronautical engineer Ernst Zindel. The aircraft’s design incorporated a corrugated duralumin metal skin as a strengthening measure, which was very unusual at the time. The Ju 52’s maiden flight was performed on 13 October 1930 which made Laco engrave „Maiden Flight 13.13.1930 on the solid back.
The Ju 52 was in production between 1931 and 1952.

The Bell X-1 (Bell Model 44) is a rocket-engine powered aircraft, originally designated as the XS-1, and was a joint supersonic research project built by Bell Aircraft. Conceived during 1944 and designed and built in 1945, it achieved a speed of nearly 1,000 miles per hour (1,600 km/h; 870 kn) in 1948. The X-1, piloted by Chuck Yeager, was the first manned aircraft exceeding the speed of sound in level flight, 14 October 1947, lservice. Captain Charles „Chuck” Yeager piloted USAF aircraft #46-062, nicknamed „Glamorous Glennis“ for his wife.

On the wrist review

I recommend all three watches as they offer the same quality in fit and finish, craftsmanship, and have variants of Japanese Miyota movement. And yet they different in design and operation. The dial design, and in one case, the position of the crown should be considered in your decision for the purchase. The Spirit of St. Louis was the least favorite from the three fliegers.

The Bell X-1 and the JU were clearly the favorites. I just like the dials of these two watches better.

Case/Crown/Crystal
The case is made from 316L stainless steel, it is mat sandblasted and then black PVD coated. The finishing on the case is amazing, Laco really stepped up the affordable flieger game here.

Case diameter is 42mm with a height of 12,8mm. The lug width is 20mm. L2L is 50mm. Due to the fact the watches are all black, they appear to wear smaller on your wrist.

The black PVD caseback is screwed on and individually engraved:
+ “Maiden Flight 13.10.1930” for the JU,

The watches are rated water resistant up to 5ATM (50m) which is fine for washing hands and shower, but not water sports.

All three are fitted with a flat sapphire crystal.

The diamond crowns are black PVD coated as well and placed on different positions due to constructional needs.

The dials are plain black with white markings and numerals, sometimes nicely shimmering in sunlight. With their bold numerals the dials have that classic cockpit clock look.

All three watches, although designed differently, are very easy to read. The dials are uncluttered and focused on the essentials, and warrant am excellent readability during day and night. Of course, the generous coating of SuperLuminova C3 on numerals, markings and hands is a positive.

The Bell X-1 dial imho is the best dial when it comes to readability. Due to its central second and a 3,6,9,12 layout it is the most uncluttered dial of all three watches.

Next comes the JU with a small second at 6 and numerals from 1 to 12.

And, last but not least, comes the Spirit of St. Louis with the small second at 12 o’clock with the hands almost touching the seconds chapter.

Comparing those three dials the dial of the Bell X-1 seems to be the most contemporary dial design which is underlined by the sword hands. These sword hands are used by a multitude of Flieger watches like Stowa, Dekla, Laco.

The JU is equipped with a “Squelette” hour hand combined with a more contemporary sword hand interpretation as minute hand.

Laco is paying homage to the hands of the Spirit of St. Louis cockpit clock made by Waltham. A nice touch showing Laco’s love for details.

Laco fitted their JU and Spirit of St. Louis with the 21 jewels automatic Miyota 8218 with Parashock shock protection. It beats at rate of 21.600 b/h, the power reserve is approximately 42hrs.

Miyota states that the caliber 8218 keeps accuracy within -20～+40 seconds/day. I have no doubts about that, and I did not personally time the watch accuracy. The Miyota 8218 is a great workhorse and proven to be reliable.

The 821A is based on the Miyota 8215 which is very popular in the affordable automatic watches category.

The main difference between the 821A and 8215 is that the 821A has a decorated finish and a cutout rotor instead of a solid half circle.

The strap on all three watches is a grey nylon strap with stainless steel black PVD pin buckle, robust and good looking. I am already familiar with this strap, it was mounted on my Laco Leipzig Blaue Stunde until I decided to put it on the camouflage strap Laco is offering.

Laco has a rich and interesting history in watchmaking, specifically in making pilot’s watches. They obviously aim to meet every price point. The three watches retail for €540 each (including VAT), which is budget friendly for what you get. The JU, Bell X-1, Spirit of St. Louis look and feel great on the wrist. You’re getting something with a tradition and history behind it. Even if they aren’t made for everyday wear due to their cockpit clocks inspired design, wearing them makes you happy, especially if you are an aviation aficionado or a flieger enthusiast.