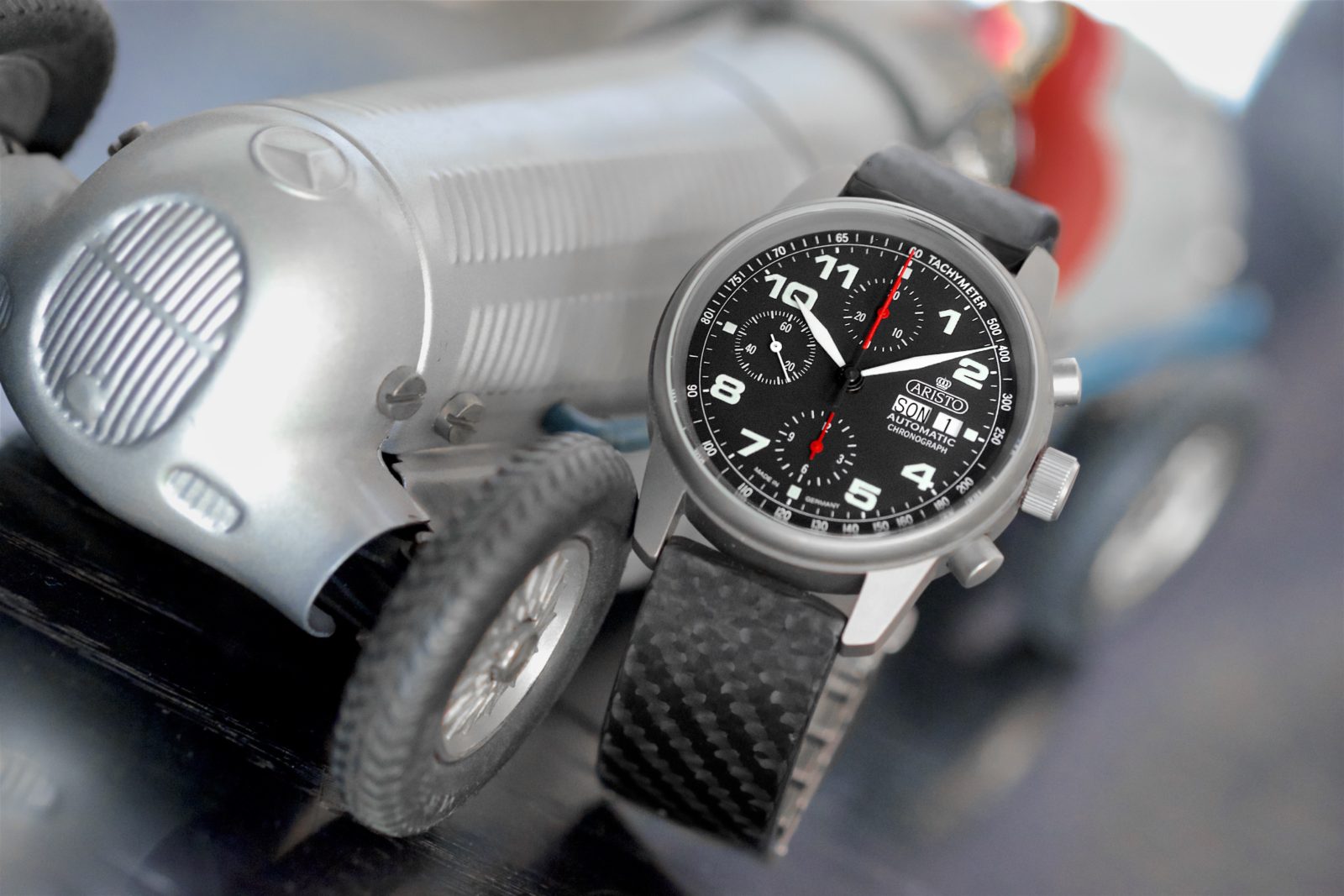 On July 12, 2019, WatchUSeek Team visited the Aristo Vollmer watch and strap manufacturer in the Black Forest town of Pforzheim. Aristo-Vollmer was founded 14 years ago as a merger of two well-known, and old companies from the towns of Birkenfeld and Pforzheim.

Since 2005 the Aristo-Vollmer’s portfolio includes watch brands (Aristo, Aristomatic, Aristocrat, Messerschmitt, Vollmer, Bellana, Aristella, and Erbprinz) as well as bracelets (stainless steel, titanium, carbon), buckles, and deployants. The bracelets are used for its own watch brands, and supplied to retailers, and other watch brands, like Island Watches in US, and Steinhart in Germany. The current collection consists of 200 different bracelets.

In 1907, the watchmaker Julius Epple I (born 1865) founded the Julius Epple KG in Pforzheim. At that time, the company produced watches and watch cases.  In 1934, Epple took over the Rohwerkfabrik Maurer & Reiling, and since then also produced its own hand-winding movement known as JE Urofa 56. The brand name “Aristo” was used since the mid-1920s and registered on January 31, 1936 at the former “Imperial Patent Office”.

Because a suitable successor was missing, he sold significant parts of the company in 1993 to the Uhrentechnik Weimar (UTW). In 1995, essential means of production and the brand name Aristo went back to Helmut Julius Epple III. In 1998, Helmut Julius Epple sold the shell company and the Aristo brand to the watchmaker Hansjörg Vollmer, who has been managing the company ever since.

Hansjörg Vollmer is a grandson of the founder of the metal bracelet manufactory Vollmer (Vollmer, Evvo, New Line), which was founded in 1922 and had maintained business relations with Aristo since 1927.  After World War II, the production of bracelets moved from Birkenfeld to Pforzheim where it is still located, close to the Pforzheim Central Train Station.

At the turn of the millennium, Aristo delivered its watch products to 42 countries. In 2004, Aristo, with the model 3H45, pioneered a carbon watch with a carbon dial. A year later, Aristo introduced its new model “Carbon II” at Baselworld 2005. In 2006, the Carbon chronograph was introduced with stainless steel case treated with PVD.

From 2010 to 2012 Aristo participated in a technology program supported by the German Ministry of Economic Affairs and Research. Since then, composite constructions of bracelets (for watches and jewelry) made of carbon, in combination with stainless steel or titanium links, are being mass produced. Due to the resistance, light-weight, and the allergy-neutral properties of this material compared to steel, Aristo has extended their carbon portfolio.

After learning about the history of the brand, we were ready for the workshop tour.  Little did we expect, or know, that we were entering workshop floors where the equipment has been kept intact from the early days.  Since Vollmer factory resided few kilometers outside of Pforzheim, they were spared by the Allied bombs.  Hence, the moment you enter the workshop, you can immediately smell the oil from the machines, and see these historical machines in action like walking into the early 1940s.  Each of us glanced at each other in disbelief, but with a big grin, that we were experiencing something special.  We are so accustomed to seeing modern production with all the ISO/DIN certifications, but this was like Willy Wonka factory with fully functioning vintage fuse boxes and hand-and-foot operated machines.

After the workshop floors, we visited this small room which is used as a “museum”, and we found just treasure of old dials with a very interesting history. As some Stowa aficionados already know there was a dial making company located in Pforzheim in the 1930s/1940s, known as Weber & Baral.  A lot of new brands took up an old design of 1937 Weber & Baral dials which were – for example – used by Lange & Söhne and Stowa in those days. To our surprise, we found two samples of these old Weber & Barals dials in the archives. Nowadays you will see that this design is mostly used by Nomos (Tangente) and Stowa (Antea).

We then discovered a huge box of samples of rectangular cases ARISTO made in the 1930s/1940s, all of them had their original tags.

There was also a sample book with hand-drawn pendants for pocket watches. You do not come across this old stuff often.

As we sifted through all the historical dials, cases, bracelets, and watches, there was this one watch which caught our eye – Aristo Bundeswehr chronograph made in co-operation with Helmut Sinn.  Aristo had made two dial variations in white/cream and black and cased it the 1970’s Sinn 144 steel case with reference 3H19xx.  There were few variations of the Tachymeter and other scales inside the bezel as well.  The watch was powered by Valjoux 7750 and had German Day with date.  This specific example had the Vollmer mesh bracelet.  There are other known examples in Aristo’s catalog from early 2000s, which come with a Bund leather strap. Just out of curiosity I asked Mr. Vollmer if he may have some examples of this watch laying around.  He immediately responded that he has parts with the dial to make couple of watches, and if I was interested he could make one.  Before he could finish the sentence, we shook hands.  When I receive this vintage beauty, I will write an in-depth review comparing it to my Sinn 144 St Sa.

Even though we did not want this tour to end, in consideration for time, we sat down to view some of the current collection.  Here are the highlights from the collection:

This was stunning on the carbon fiber bracelet

This watch is available as a Messerschmitt model as well.

Hansjörg Vollmer found 200 NOS diver‘s watch cases of the 1970s/1980s and decided to launch the Retro Diver (not a surprise in this workshop!). The Retro Diver will be available branded as Aristo or Messerschmitt. Both will be equipped with a Ronda quartz movement, caliber 705. prices will start at €149. With 1970s rallye style bracelet the price was slightly higher at €198.

Dial: Made is out of a former ME 262 plane metal sheet, fixed with two screws

As you can conclude from this report Watchuseek team had a lot of fun travelling back in time machine and witnessing something special. Our special thanks go to Hansjörg Vollmer, who did not get tired answering our questions (and we had a lot). And thank you also to Mrs. Vollmer who had prepared some delicious butter pretzels for us as snacks.

Stay tuned if you are interested in Aristo watches, as we bring you reviews of specific watches.