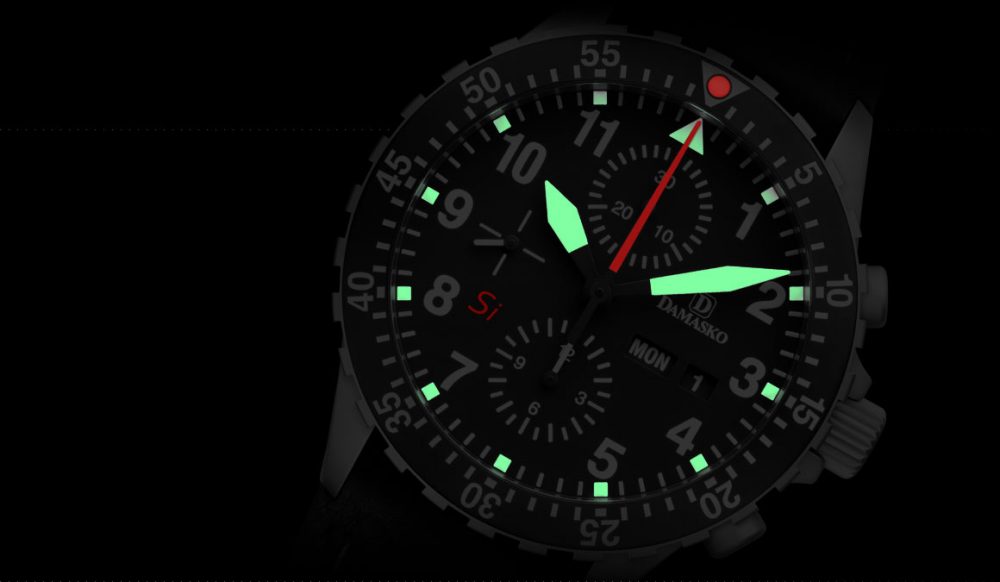 Damasko is a family owned watch brand based in Barbing, a small village close to Regensburg, the Donau and the Walhalla in Germany.  Konrad Damasko learned metalworking at a young age and worked for several companies before starting his own business.  His fascination with fine mechanics lead him to develop the Damasko watch.  In 1994, “Damasko Feiner Uhrenbau” was officially formed, even though there was a firewall between the two businesses, where Konrad was the head of “Damasko Metallbearbeitung” and his wife Petra is the CEO of Damasko Feiner Uhrenbau.  In 2013, Damasko Metallbearbeitung business was dissolved.

Damasko used their expertise in metallurgy and machinery to manufacture advanced steel cases.    It took more than 3 ½ years of extensive work to realize the DAMINOX process, which allows to harden austenitic steel alloy (316L, 904) to between 1000 and 1800 HV, depending on the composition of the stainless steel. So far, the “ice-hardening” process of martensitic steel (Damasko uses 1.41.08) was the first step into a new world of hardened steel.

While Damasko has the expertise in metalwork, we wondered about watchmaking expertise? Konrad Damasko spoke with Mike Stuffler about it and said, “I am not a watchmaker. I don´t know what I am but I have some autodidactic capabilities which helped me to learn everything about watches and their function by reading books, surfing the net or by contacts. Helmut Sinn is a friend of mine and one of “those” contacts. Step by step I learned watchmaking. I demount and assemble a Valjoux 7750 in no time (Konrad smiles).”

Not only did Konrad self-learn watchmaking, he started the process to manufacture his own movement.  He explained to Mike, “If a DAMSKO movement should be unveiled the decision to get stuck into the production of an in-house movement should be taken as soon as possible. “Damasko Feiner Uhrenbau” is still a family run business. With three kids, two cats, and 14 employees you have a certain responsibility and it´ll need a huge financial input to get things done if you want to do them right. But it´s not only a financial effort – you will need an investment of about 2 Million Euros- some supply questions are as important as the investment. I must be assured or at least convinced that the key components are provided / available in sufficient quantities. The key components are: ball bearing for the rotor, anchor, anchor wheel, spring, gears, minute wheel (what we call the “Wechselrad”), and jewels.”

Konrad explained further, “To get a minute wheel – like the Valjoux 7750 is fitted with could become problematic. As far as I know there are only two producers of this essential part, without it you must invent another winding mechanism. That´s why I experimented with a ball-bearing-winding-mechanism. I am not going to produce this mechanism in series but it´s the product of brainstorming as well and shows what´s possible in watchmaking. NOMOS tried it by another construction named “Wippbewegungsgleichrichter”(“teeter motion rectifier”) and a duplex wheel with a loose clutch. The way NOMOS solved the problem is just another approach though.”

“Regarding some of these essential parts “which I call key parts” – I made some progress in the last time. I experimented with a silicon carbide hair spring (balance spring) and it seems that the new spring will work out which would be another step towards an in-house movement”, Konrad commented on the development of the in-house movement.

Damasko is one of the very few German watch manufacturers producing in-house movements (A35, H35) with almost 90% vertical range of manufacture and offering their watches for a reasonable price ($1,000 – $3,500).

Case: Damasko’s expertise in steel lead to a patented “ice-hardened, nickel-free stainless steel”.  This steel reaches a maximum hardness of 62 Rockwell which makes it highly scratch-resistant.  The entire watch case, including hardened crown and pushers is designed, engineered, and machined at the Barbing factory.

Gasket: Normal O-ring gaskets are made from an elastic material such as Nitril. The longevity of these gaskets is to a large extend determined by the quality of the material and the friction between the stem and the O-ring. This friction factor increases the wear and ultimately leads to worn out and leaking sealing elements. Damasko developed a lubrication cell, a tube made of Damasko patented hardened stainless steel which is screwed into the drill holes for the crown and the pushers. The cell is filled with a synthetic viscous lubricant and sealed with two Viton elements which prevent the filling from leaking or migrating. The lubricant fills the microscopic surface roughness of the crown and pusher stem to eliminate friction and wear.

Oil-free Escapement: Damasko came up with a clever way to eliminate tradition lubricant-based escapement by coating it with DLC.  The DLC coating not only made it resistant to wear and tear, but also provided extremely low friction coefficient between the anchor and the escapement wheel to eliminate any need for lubricant.  Damasko’s vision is for a complete oil-free movement.

Silicon Balance spring: Damasko started making their own balance spring using the process of DRIE (deep reactive ion etching).  Silicon improves the isochronism; it is antimagnetic and resistant to temperature variation; and it less sensitive to gravitational force since it is three-times lighter than the traditional (hardened steel) springs.

In October 2016, Damasko opened their so called Monostore (since there will be only one), in the heart of the historic city of Regensburg.

What is in the Pipeline?

After August 2017, we will likely see a new Damasko in a 39mm case and ETA 2824-2 movement. Due to the construction of the ETA 2824-2, this Damasko will be a little flatter than we are used to from the Damasko watches with ETA 2836-2. These Damasko watches were made upon a request of an Asian authorized dealer.

The DSub1 (in Black) will soon be available through Damasko’s authorized dealers.

The DC 86 is scheduled to be finally released this year, and there’s almost no visual difference to the prototype we saw in Munich Time 2011.

At the Munichtime 2017 show (scheduled in November), Damasko will also unveil a completely new DC 8-series: DC 80, DC 82, DC 84, DC 88. The DC 8-series resembles a “construction set” concept. The 8-series will consist of a Bi-compax chronograph, Tri-compax, GMT (+ 24 hrs. sub-dial), and day/date indication. The ETA / Valjoux 7750 will continue to be the base for the 8-series, but all modifications have been developed in-house (not just adding a module on top of a 7750 ébauche), including new plates which have been integrated into the 7750 movement.

We at Watchuseek are celebrating a 14-year relationship between Damasko and WatchUSeek.  We are proud to run the official Damasko Uhren forum.

Special acknowledgement: I would like to thank Mike Stuffler for his interview with Konrad and his expertise.