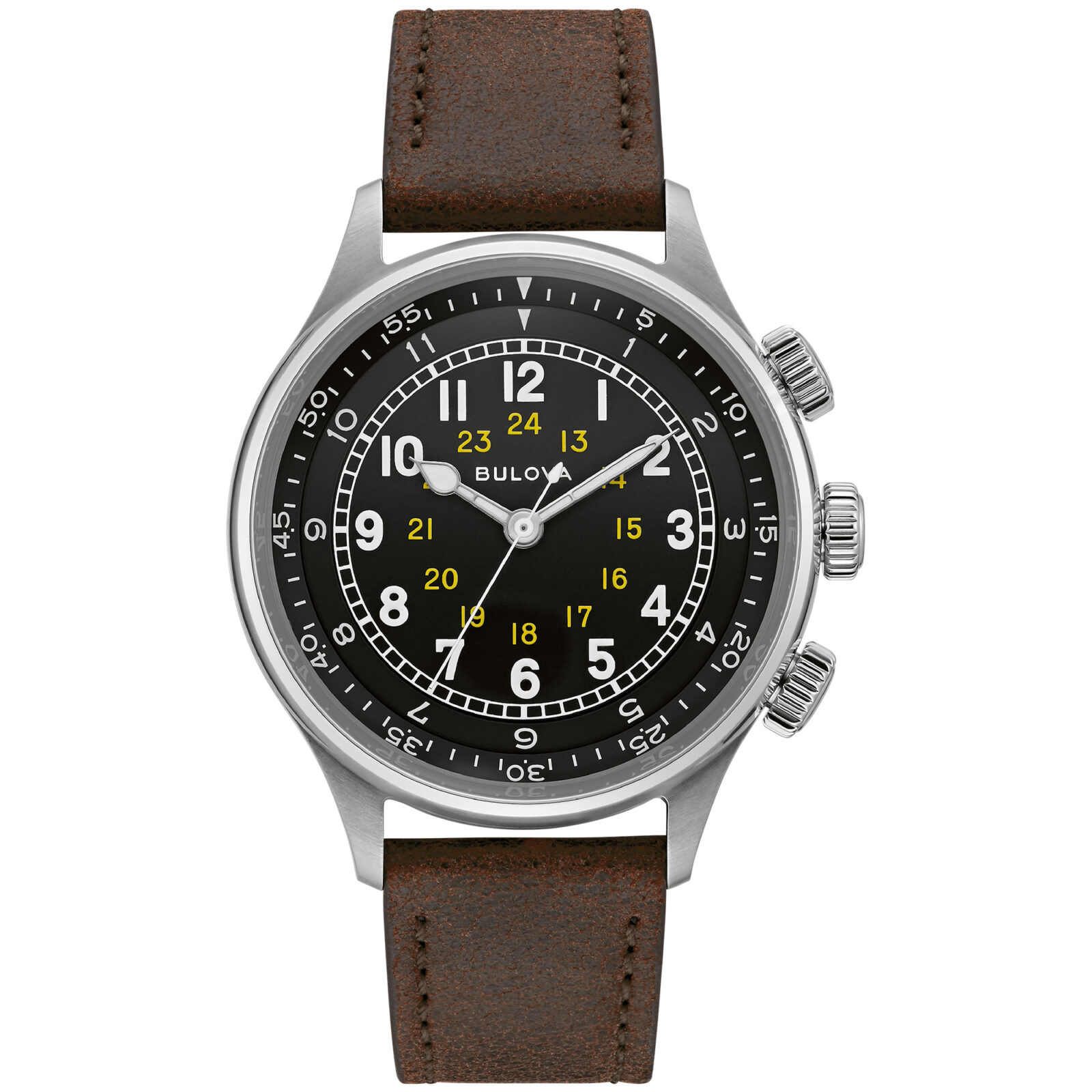 Military tool watches have always been popular with watch enthusiasts, especially affordable watches bearing the original brand name. Bulova has a storied history of military issued tool watches, and it just announced a homage to the A-15 Pilot, which was created as a test watch for US military. The new A-15 Pilot design takes cues from the original including a distinctive dial with two rotating inner discs that are operated by two separate crowns. Original A-15 is unique and rare since it was never issued (only tested), and approximately 500 of them were ever made.

According to Ziggy Wesolowski’s book ‘Military Timepieces 1880 – 1990’, in June 1943 the USAAF (Air Technical Service Command, Wright Field, Dayton, Ohio) initiated a project to test a new pilot watch developed by the Bulova Watch Company. The watch, a chronograph type incorporating a rim accumulator providing sixty minutes total elapsed time, was being considered because of reports that the Type A-11 hack watch was proving unsuitable. Key issues identified with the Type A-11 included difficulty in determining the elapsed time and the inability to read the dial at night.

At the beginning of any period for which it is desired to measure the elapsed time, the following procedures are to be followed:

The Type A-15 operated exactly as the Type A-11 hack watch with regard to winding, stopping, starting, and synchronizing. The case was a nickel-plated brass measuring 39.8 mm lug to lug, and 32.5mm in dial circumference. The unit cost of the Bulova Type A-15 was $25 in 1944/45. Based on historical documents obtained, it appears that approximately 500 Type A-15 watches were service tested both in theatres of operation (Europe, Asia and the Pacific) as well as continental US in late 1944 and early 1945. All service tests on the Type A-15 watch were completed by 1 May 1945. The AAF Board subsequently made the decision that there was no military requirement for the Type A-15. So, according to Ziggy Wesolowski, Type A-15 was tested, but never adopted. However, the Air Technical Service Command instructed some locations after testing that the Type A-15 could be issued to pilots on the same basis as the Type A-11 hack watch. Therefore, at least some of the test Bulova Type A-15 watches were subsequently issued, and most likely to USAAF pilots involved in military operations in Europe, Asia and the Pacific.

So, how is the recently released A-15 homage different than the original? While the overall design and functionality of measuring elapsed time remains the same, this watch has all the characteristics of a modern tool watch. The polished stainless-steel case is 42mm in diameter and 14.05mm in height and is protected by a domed sapphire crystal with anti-reflective coating. The crown at 2 o’clock rotates to indicate elapsed time in minutes, and crown at 4 o’clock rotates to indicate elapsed time in hours and may also be used as a dual time feature. The layout and color scheme of the dial remains the same as the original. The cathedral hands also stay true to the homage of the historical model.

The Bulova A-15 Pilot is powered by Japanese Miyota 82S6 automatic movement, which is curious since Miyota catalog does not contain 82S6 as part of their standard automatic offering. 82S5 and 82S7 are known for implementation in open heart dial, but presently no information is available on 82S6. If Miyota is presenting in Basel this year, we will find out more information and add an update. The watch comes with a top-stitched brown leather strap. Retail price is $695, which places it in the affordable pilot watch category.