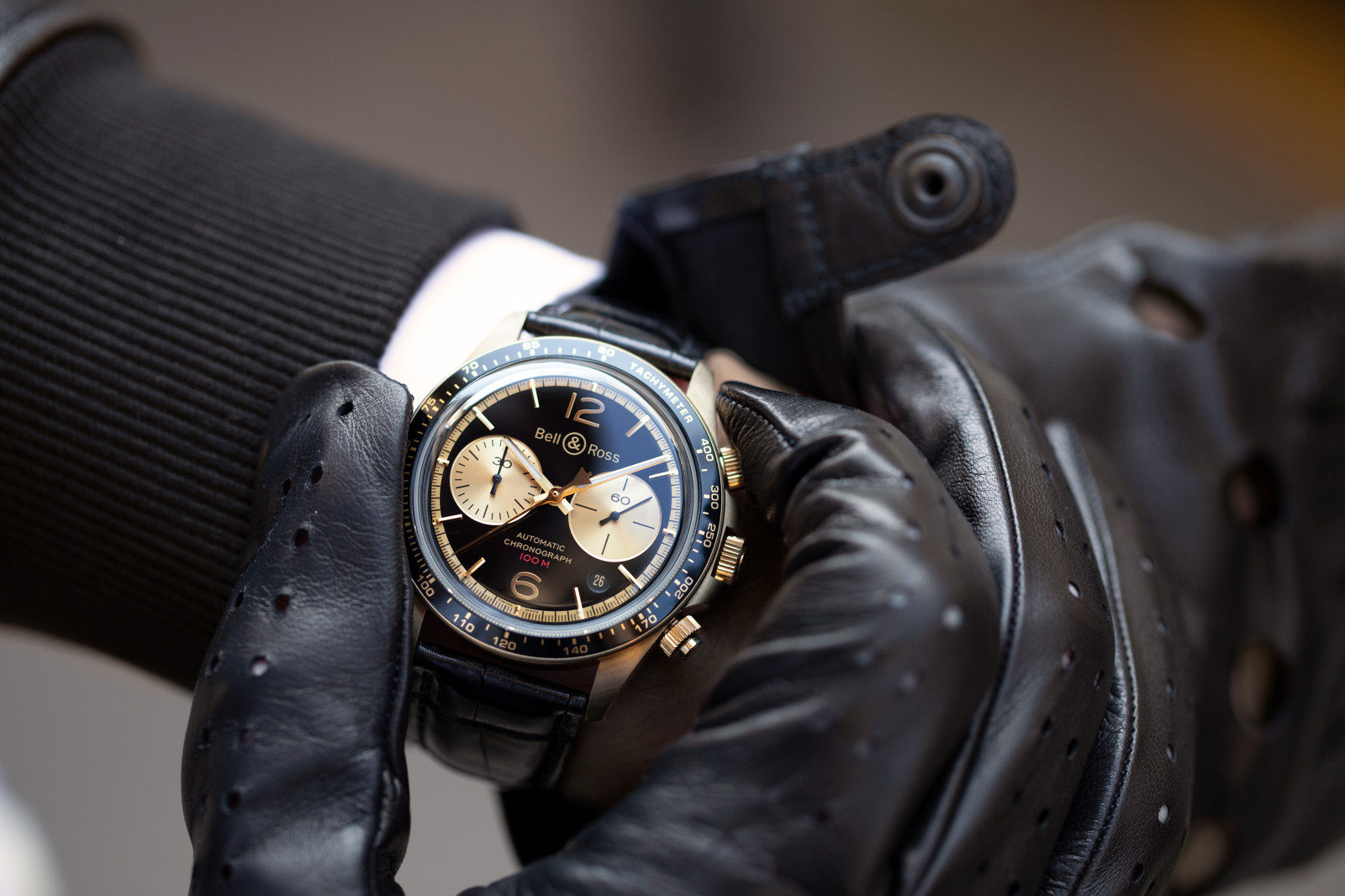 In this special Flieger Friday Father’s Day edition, we bring you a Baselworld 2019 favorite – Bell & Ross BR V2-94 Bellytanker Bronze.  While the Bellytanker design was already attractive from couple of years ago, the addition of bronze and black really morphed into a très à la mode sports watch.

In 2017, Bell & Ross created a retro-influenced Bellytanker racecar, with missile-like aerodynamics. It is built using a fuel tank from a fighter plane. Fitted with an engine and four wheels, this tank is transformed into a streamlined racer. The Bellytanker is best known for taking part in speed trials on the huge Salt Lake flats of the American West. These gigantic open stretches of desert, where most of the water has evaporated, are particularly well suited to motor racing competitions. The Bonneville Salt Flats in Utah are the most famous example.

Bellytanker history dates to the end of WW II. Bill Burke, an American speed freak, wanted to build an ultra-fast car to take part in the races being held on the salt flats. He had fought in the South Pacific and had grown to love the design of these fighter plane drop tanks, with their aerodynamic lines as if sculpted by the wind. To his eyes, they looked like the perfect foundations on which to build his speed machine. He was not wrong, since their droplet shape ensured exceptional performance. At the end of the war many military components were sold off cheap.

In 1946, he bought a drop tank from a P-51 Mustang for $35. He used it to build a bright yellow mini hot-rod. He fitted the tank that formed the bodywork, on a chassis, powering it with a powerful V8 engine. He took his prototype to the Bonneville Salt Lake races to test it. Without realizing it, he had created the world’s first Bellytanker.

The shape and design of this aerodynamic vehicle have ensured its place in the great American aeronautical history in the forties and fifties. It is also enshrined in the annals of motor racing with the Hot Rod and the Streamliner. In the automotive world, it also rapidly acquired cult status.

In 2017, Bell & Ross designed its own vehicle, taking these later versions of the Bellytanker as its inspiration. Being part of a plane on wheels, this new vehicle is perfectly aligned with the spirit of the watch brand, which has aviation and the military at its core. Now in 2019, the brand released an attractive variation of Bellytanker limited edition in bronze case.

In the new Bellytanker, the 41mm case and the bezel are crafted from CuAI7Si2 bronze, also known as aluminum bronze. The bezel features an anodized aluminum insert with a tachymeter scale. The dial is protected by an ultra-curved sapphire crystal with anti-reflective coating. The dial offers an excellent contrast between the bronze-color sub-dials and the glossy black surface of the dial. It has metal applique numerals and indices, and applied metal and skeletonized hour and minute hands, filled with SuperLuminova. The sits discreetly between 4 and 5 o’clock, which Bell & Ross has perfected in all their instrument watches. The two sub-dials are 30-minute chronograph at 9 o’clock, and the seconds at 3 o’clock.

The chronograph pushers and the crown are screw-down for enhanced water resistance of 100 meters.  The watch is powered by reliable ETA 2894-2 automatic movement with a chronograph module has a power reserve of 40 hours.  The sapphire crystal on the case-back has the markings of the limited edition with the picture of a bellytanker.  You get a black calfskin leather strap with a satin-polished CuAl7Si2 bronze folding clasp, which is adequate.  Although, this watch is begging for a glossy alligator strap with butterscotch stitching.