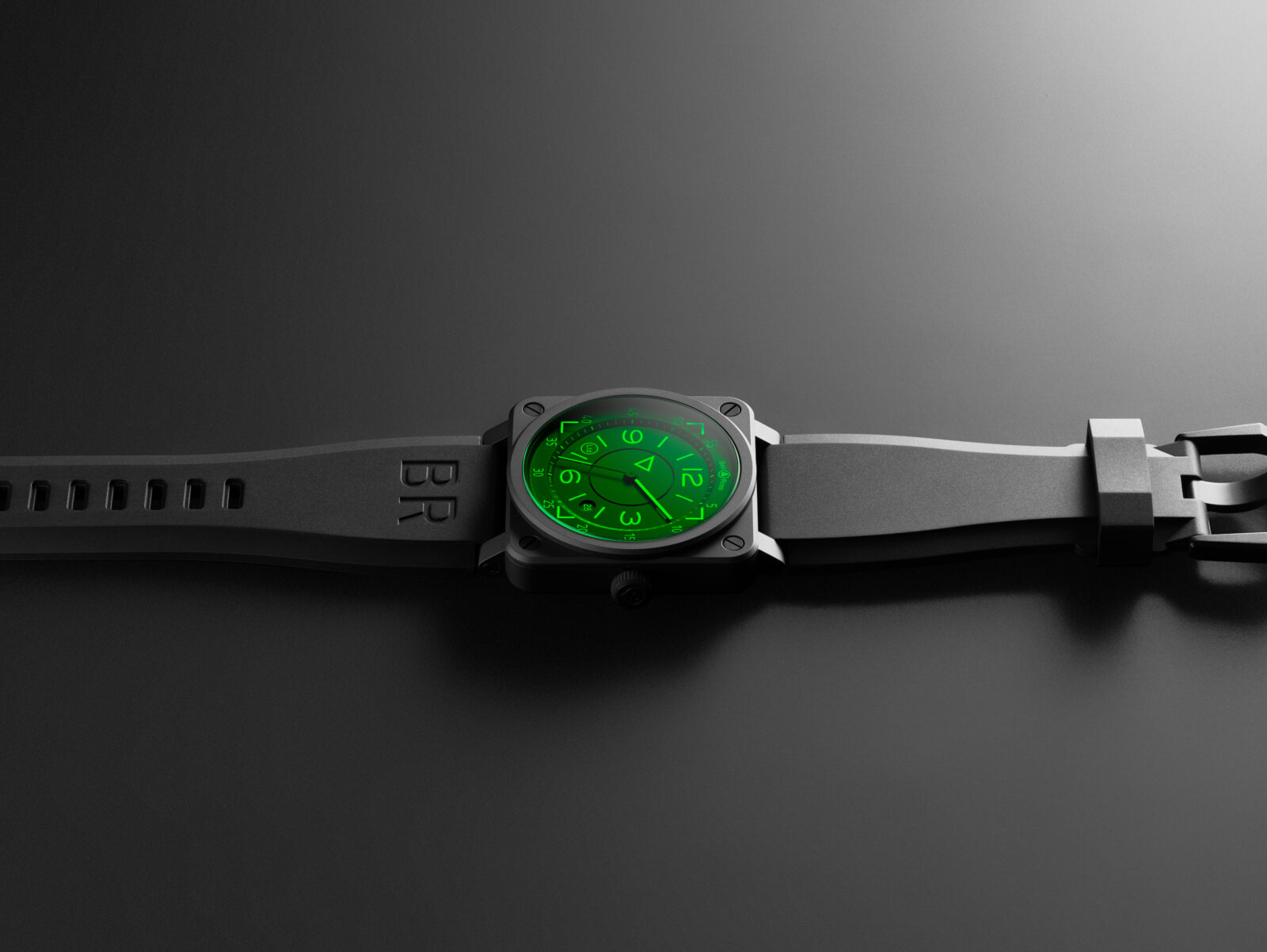 Since 2010 Bell & Ross has been releasing limited edition models that tie into a specific function of the instrument panel on a jet. In 2019, they released the Bi-Compass 42 mm BR 03-92 watch where the dial is inspired by the compass in a military jet. For 2020, Bell & Ross announced an instrument watch inspired by the Head-Up Display (HUD) with a cool illusion of a green crystal to give it the effect of a projected screen.

A HUD is a means of presenting information to the pilot in the line of their external forward vision which projects key flight instrument data onto a small ‘see-through’ screen positioned just in front of the pilot line of sight looking ahead out of the aircraft. It is possible for the pilot to maintain an external lookout without losing access to key aircraft instrumentation.

Holographic technology makes the image on the screen appear to be far out in front of the aircraft so that the pilot does not have to change eye focus to view a screen which may only be 20cm away.

Not surprisingly, military applications have led the way but following the introduction of the first civil HUD application in 1993, both general aviation and airline applications have been growing and nowadays. All the major avionic manufacturers who originally developed equipment for the military market are now also supplying the civil market.

The technical construction of BR 03-92 HUD watch was conceived by their designers to create an overlay that echoes the real HUD Instrument. Thus, the concept of Augmented Reality adapted to a timepiece hinges on 3 layers:

On the top layer, the green-tinted sapphire crystal gives the illusion of the digital HUD display, using the surface of the black disc dial and that of the crystal. The tinted sapphire crystal gets its color through a green pigment coating technique that is applied on its underside. Four brackets are printed on the reverse of the crystal, mimicking the four corners of the HUD line of sight.

On the middle layer, the black and green hands reveal the minutes and seconds. The visuals for distinguishing hour, minute, and seconds were enhanced by representing hour hand with only a green marker on the rotating disc, seconds hand with black in the middle to keep minute hand in focus.

On the bottom layer, the hours are indicated by a green triangle marker which appears in the center through an independent concentric disc which is not graduated. This ultra-light disc was developed to ensure that neither accuracy nor power of the watch were impacted. Yet the disc has enough resistant to not become deformed from risk of any friction. The small date at 4 o’clock blends in seamlessly.

To create an illusion of HUD in low light condition, hours numerals, indices, triangle, as well as the minute-circle and hands are coated with green SuperLumiNova C3. The C3 lume is also applied on the four brackets underneath the crystal.

The HUD watch is powered by BR 302 caliber, which is essentially Sellita SW 300-1 base automatic caliber. The watch comes on a black rubber strap with an additional black synthetic fabric strap inside the box. The retail price is $3,990, and pre-order is accepted now, with delivery scheduled in August 2020. For more information, visit Bell & Ross website.