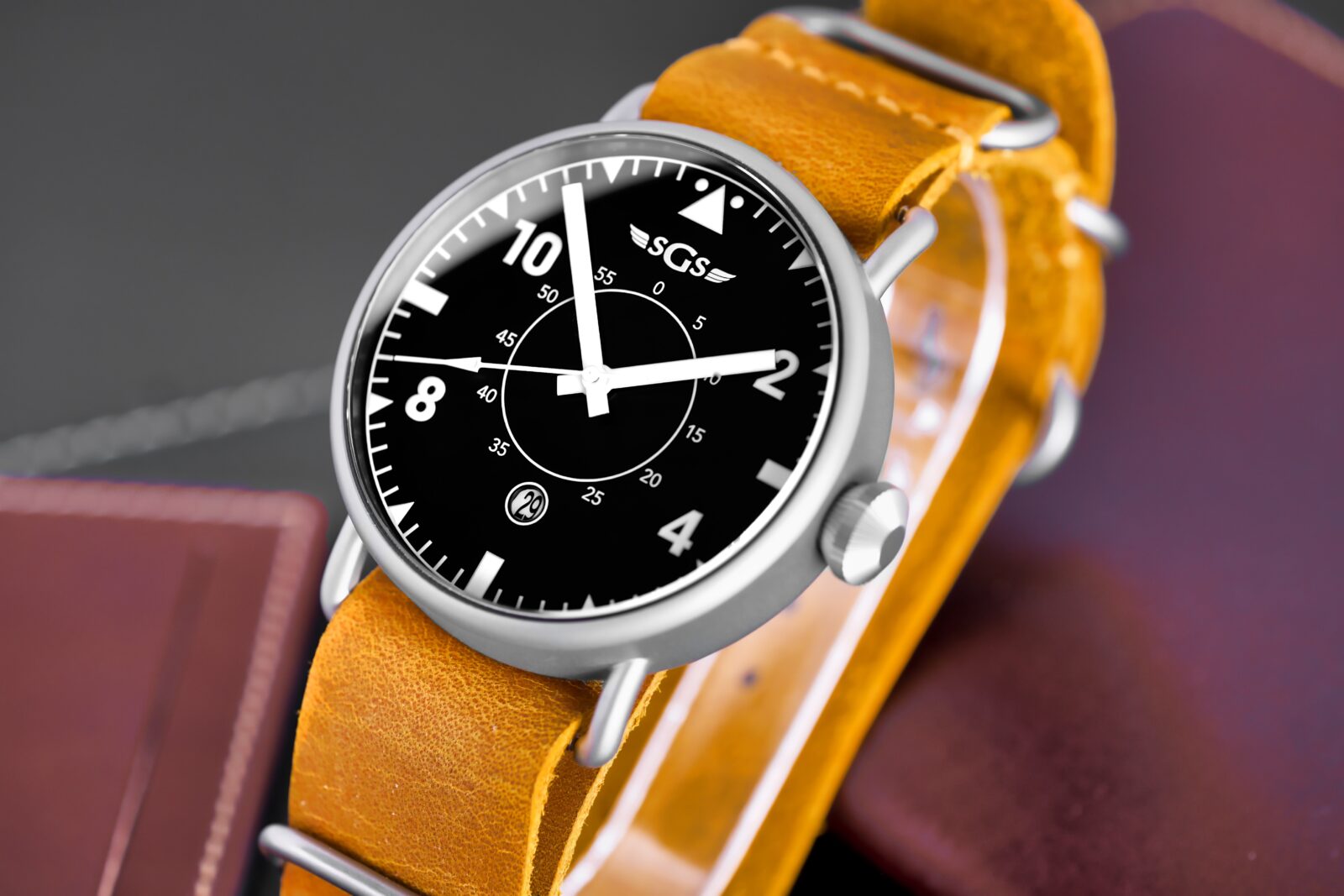 Watchuseek team came across SGS Watches in 2019 Fall, when they presented their fliegers at the AuroChronos event in Lodz, Poland.  Even though center of universe for pilot watches remains in Switzerland and Germany, occasionally we come across micro brands from different part of the world. These brands are usually family operated and have an interesting story to narrate along with showcasing their affordable flieger.

This is the story of three Lithuanians – two brothers, Gediminas and Emilis, and their friend Dominykas. They started their journey in 2015 as online resellers of various watch brands. Gediminas stated “After being in the industry for over a year we thought that it would only be logical to move towards our own brand and create a watch that we would love to wear ourselves. Our vision was to create a pilot watch with modern twist in the design, specifications that we would like to have in a watch and an affordable price tag. The design is our own creation, mostly done by my brother who is an artist and a designer at heart. We also gave every aspect of the watch a thought and wanted to create something special and close to us.”

It is a familiar story of how micro brands approach manufacturing watches at affordable prices.  They partner with a manufacturer in China; provide their design and specifications; and after few iterations, get the final sample which will then go into production. SGS followed the same approach, and then turned to Kickstarter for their marketing campaign. In 2017, SGS launched Kickstarter campaign which raised $100,000. After fulfilling all the orders, they released second version of Eagle pilot in mid-2019.  Before elaborating on complete details of the watch, I would like to point out the difference between the Kickstarter version and the 2019 version – SGS made the switch from Miyota 8215 movement to Seiko NH35A movement in their automatic watch.  The switch I think is a (slight) upgrade due to the hacking feature, hand winding capability, and magic lever (bi-directional winding) of the Seiko movement over the outdated Miyota 8215.  The quartz version remains the same with reliable Miyota 2315 movement.

I had wrist time with both quartz and automatic versions, other than the weight, both watches have the same dimensions.  The steel case is 42mm with 12mm of thickness, and lugs measuring 22mm.  I personally liked the PVD matte finish on the Eagle automatic, but I can see other watch enthusiasts shying away, as it may become a scratch magnet. The steel cases are hardened to be more scratch and corrosion resistant. The oversized 5.2mm diamond shaped crown is inspired by the WWII fliegers, but it is clearly a modern crown. Personally, I felt more conflicted with the domed sapphire crystal.  While it is brilliant to include a sapphire crystal in a $250 pilot watch for vintage appeal, it would be better to have the crystal be flatter for enhanced visibility.  At an angle, or under a strong light source, the domed crystal causes slight distortion.

The SGS Eagle dial is the main attraction, and I have named it as the “inside-out” Type-B flieger dial.  WWII flieger requirement was to have minutes on the outer ring, and hours on the inner circle.  However, SGS has reversed that with the minutes on the inner circle and the hour markers with 2,4,8, and 10 in large print.  It works! Because outer ring also has the minute track.  It is easy to read the time at a glance. Perhaps inner circle with the minutes then becomes almost cosmetic.  The date execution at 6 O’clock in a round aperture blends in very well with the dial.  The date reminds me of Bell & Ross pilot watches, albeit they place the date between 4 and 5 O’clock. The lume is strong and low light legibility is very good. SGS offers dials in three variations – Black white, Black tan, Silver white.

The Kickstarter version has “Founders Edition” with an Eagle engraving on the case back.  The 2019 Eagle edition has Lituanica with the image of Bellanca CH-300 Pacemaker airplane, which was flown from the United States across the Atlantic Ocean by Lithuanian pilots Steponas Darius and Stasys Girėnas in 1933. A bit of a Lithuanian pride by SGS.  There are five leather ZULU straps (Black, Brown, Camel, Navy blue, Raspberry red).  The Eagle Quartz and Automatic is available directly from SGS website for $249.