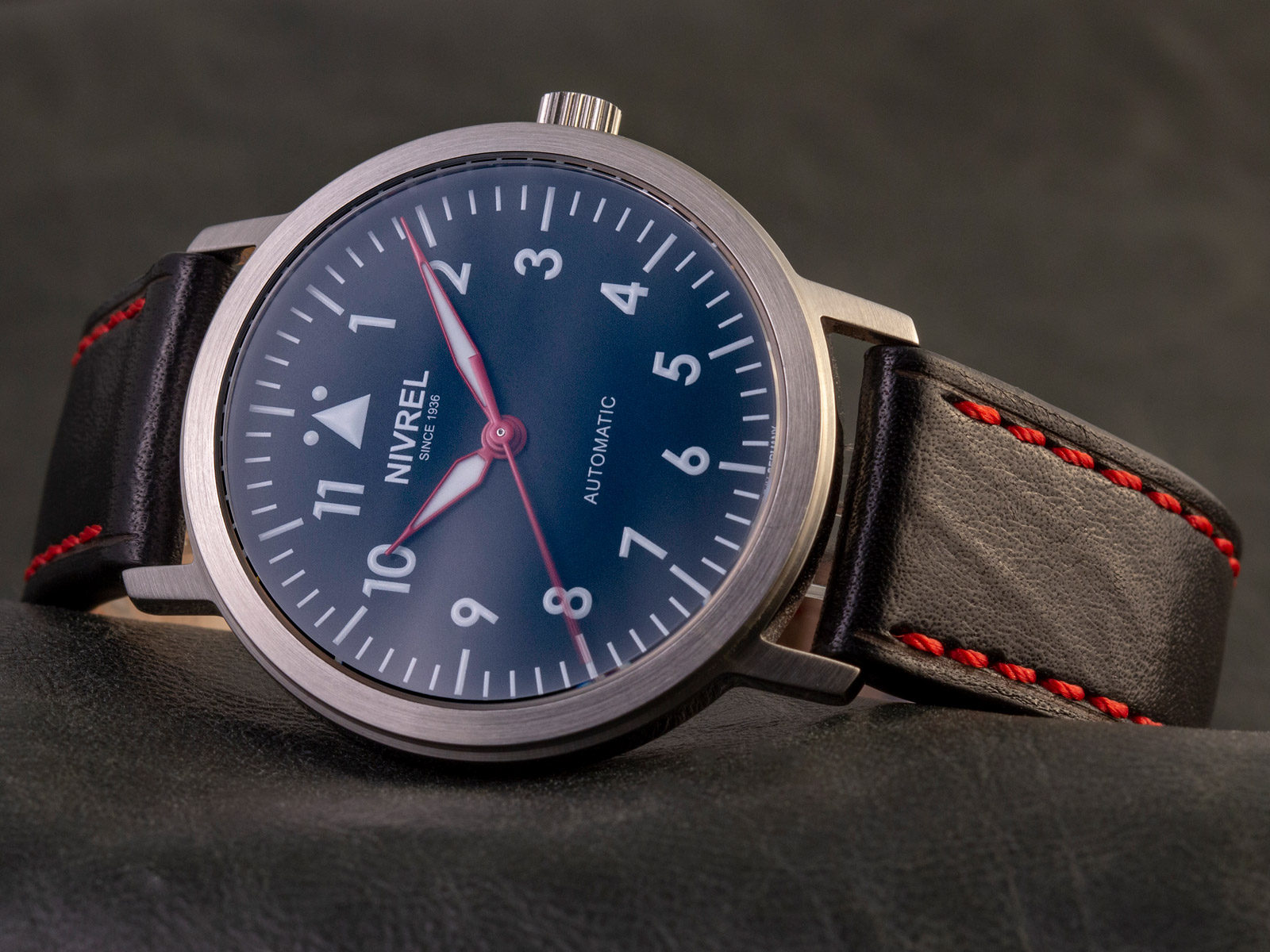 Nivrel recently presented the Replique Aviateur II flieger at the 2019 Inhorgenta fair in Germany.  This flieger is a continuation from the 2011 Aviateur model.  Essentially, Nivrel has created a modern pilot watch with all the right features.  But before we examine the watch, let’s visit the history of Nivrel, as I have some personal memory to share as well.

Gerd Hofer began working for the Swiss watch company Milus in 1965. By 1978, he was the official sales agent for all of Germany, Austria, and the Netherlands. Together with wife Gitta, he worked under the company name ‘Gerd Hofer GmbH.’ Gerd worked as a salesman and designer for Milus watches, and Gitta as the financial manager. They also undertook distribution of the Swiss brands Kelek and Revue-Thommen.

In the 1990’s Milus was sold to an investor in Hong Kong, and Kelek merged with Breiltling; allowing Gerd and Gitta Hofer the opportunity to acquire Swiss brand Nivrel in 1993.  They relocated the production to Saarbrucken.

Nivrel originated from the brand Marvin. Marvin was founded in 1850 by Marc and Emmanuel Didisheim in St. Imier, part of the Swiss Jura region. Marvin and Nivrel fell victim to the 1970’s quartz crisis, and after remaining dormant for nearly 20 years, Nivrel brand name was revived by Gerd and Gitta Hofer in 1993.

I met with Gerd Hofer at Baselworld 2006, and besides being very personable, he presented a diverse collection from Nivrel.  It included dive and pilot watches, but also some high complications in precious metals. To this day I remember the five-minute repeater in steel case was offered for €6,450!

How did Nivrel become a specialist in repeater watches? Well, it has to do with the history with Kelek.  Kelek watch company specialized in repeater watches.  When Kelek dissolved, Gerd Hofer was able to secure watch parts from the company.  I looked forward to seeing Gerd every year in Basel.  Sadly, when I visited the Nivrel booth in 2008, Anja, his daughter, informed me that Gerd passed away at the age of 67 in late 2007. Anja had assumed the management of Nivrel after Gerd’s death.

I make it a point to see Anja every year in Basel. Even though Nivrel does not officially participate in Basel, Anja shares any new releases with me.  This year Nivrel released an update to 2011 pilot watch.  I would place Aviateur II in a modern “Sports” flieger rather than a traditional flieger.  Even though it has the characteristics of a traditional flieger, the splash of red hands and red stitching on the strap makes it sportier.  I can picture the driver of Bloodhound SSC, a British supersonic land vehicle with jet engine, wearing the Aviateur II while breaking the land speed record.

The 40mm Nivrel flieger fits comfortably under the cuffs with a 10mm height.  The sapphire crystal in front has an anti-reflective coating for better visibility.  The visibility is further enhanced by the contrast of matt black dial with white printed numbers filled with Superluminova.  The contrasting red color hour and minute hands have a Superluminova in the middle.

The Aviateur II is powered by reliable ETA 2824-2 automatic movement, which can be viewed from the case back through a mineral crystal.  The watch is water-resistant to 50 meters.  A nice vintage leather strap in black with red stitching is provided.  The retail price is €599.

In conclusion, Nivrel has done well with Aviateur II as a wearable modern flieger with reliable ETA movement for a reasonable price.