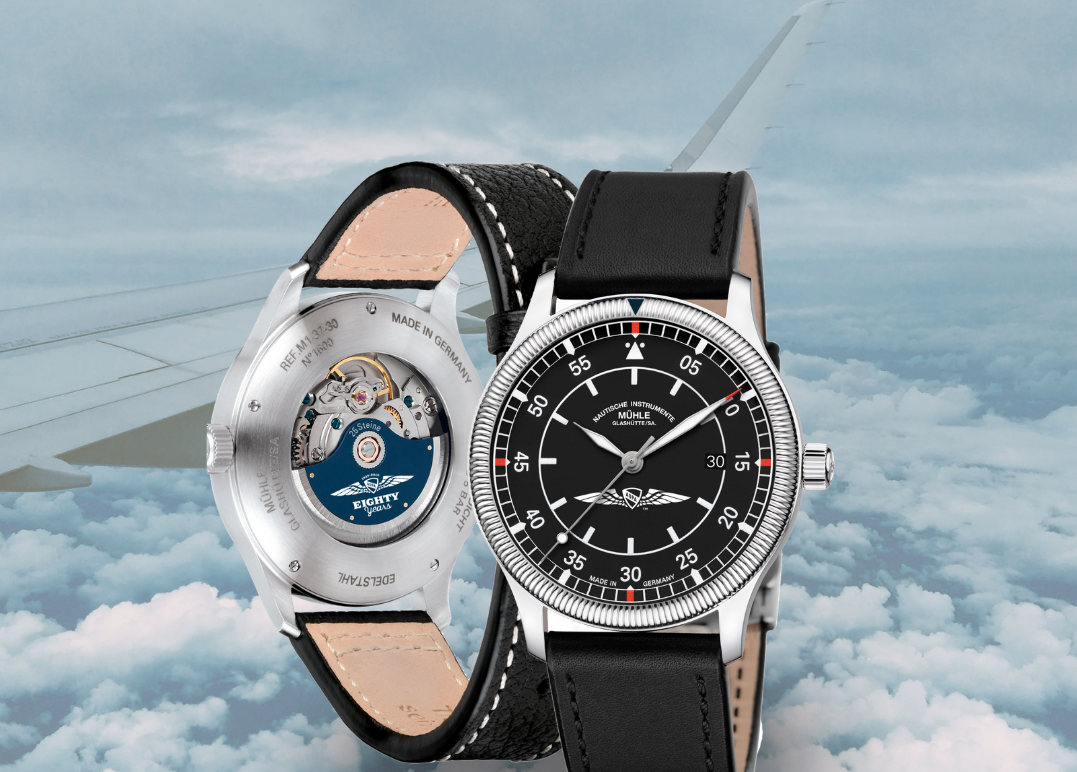 In 2019, both Mühle Glashütte and AOPA ((The Aircraft Owners and Pilots Association) are celebrating big milestones – Mühle is celebrating its 150th anniversary, and AOPA is celebrating its 80th anniversary. During the WatchTime New York event in October, Mühle announced a collaboration with AOPA by releasing a limited-edition pilot watch to honor the aviation association. It will worthy to provide you a brief overview of the history of both the organizations prior to presenting the details of Aerosport pilot watch.

The history of the Mühle family has its roots in the German federal state of Saxony which back a long way. Robert Mühle started manufacturing measuring instruments in Glashütte on 22nd April 1869. In the early 1900s Paul, Alfred and Max Mühle, the second generation of the family expanded the production to speedometers, rev counters and car clocks. These devices used by Horch and DKW, as well as BMW and Triumph motorcycles. Many dials of Mühle speedometers bear the insignia of windmill, which is the English translation of the German word “Mühle”.

After Second World War, Hans Mühle, third generation of family, founded a new company in December 1945 under the name of “Ing. Hans Mühle”. The company manufactured variety of measuring equipment like traveling mechanisms and escapements for photography and cinema industries, or motion works for pressure and temperature measuring devices. When Hans Mühle passed away in 1970, the fourth generation, his son Hans-Jürgen Mühle took over his father’s company However, that was short-lived due to war expropriation when the family business was converted into the state-owned enterprise. After the re-unification, Hans-Jürgen Mühle re-established the family company to manufacture traditional marine time systems and marine chronometers with two employees on 1st April 1994. The following year Mühle-Glashütte’s wristwatch production began with men’s sport diving watch and marine pilot watch.

Thilo Mühle joined the family company in the year 2000. With his down-to-earth approach, typical of Mühle-Glashütte, he initially took on responsibility for the product development of modern wristwatches. In 2007, the fifth generation of the Mühle family officially took the helm of family business. Mühle-Glashütte started the year 2019 with a total of 60 employees, 35 of whom are involved in the company’s production activities.

The Aircraft Owners and Pilots Association (AOPA) is a non-profit political organization that advocates for general aviation. The organization started at Wings Field in Blue Bell, Pennsylvania, and incorporated on May 15, 1939. AOPA’s membership consists mainly of general aviation pilots in the United States, even though it is a world-wide organization. In fact, with nearly 400,000 members, it is the largest aviation association in the world. The mission of
AOPA is to serve the interests of its members as aircraft owners and pilots, and to promote the economy, safety, utility, and popularity of flight in general aviation aircraft.

This year AOPA selected Mühle to issue an 80th anniversary watch by placing the recognizable AOPA wings on the pilot watch. Even though it is a traditional pilot watch, the brand has tastefully injected the Red, White, and Blue color elements into this watch. The 42.3mm case is polished stainless steel, with a height of 10.5mm. The 60-click, bi-directional rotating coin-edge bezel has a navy color PIP indicator which can used as a countdown timer, or as a second time zone (GMT) function. The screw-down crown offers water resistant rating of 100 meters. The design of the dial is inspired by the Lange & Söhne hour angle watch from WW II. The focus in the matte black dial remains on minutes, which are on the outer ring. The inner ring was originally used for measuring angles, but here it is used for hours (like a Type B dial). The red indicators at 15 minute intervals, along with a red tipped minute hand enhance the readability by dissecting the dial in four key quarter hour markers. The date at 3 o’clock may be considered out of place, but it does not disrupt the overall design of dial in any way.

AOPA Aerosport is powered by Sellita SW 200-1 automatic movement with Mühle’s patented woodpecker neck regulation. AOPA’s 80th Anniversary engraving on rotor in royal blue color is visible from the display case back. There are 500 limited edition pieces made to be sold world-wide. The retail price is $1,899, however AOPA members receive a discount with a unique code on the Mühle U.S. website.

Overall impression is that Aerosport is a solid, conservative, and well executed watch by Mühle – which is consistently the description of brand’s pilot watch offerings. Thilo Mühle’s strategy to collaborate with various military and civilian organizations around the world gives Mühle credibility with watch, aviation enthusiasts.