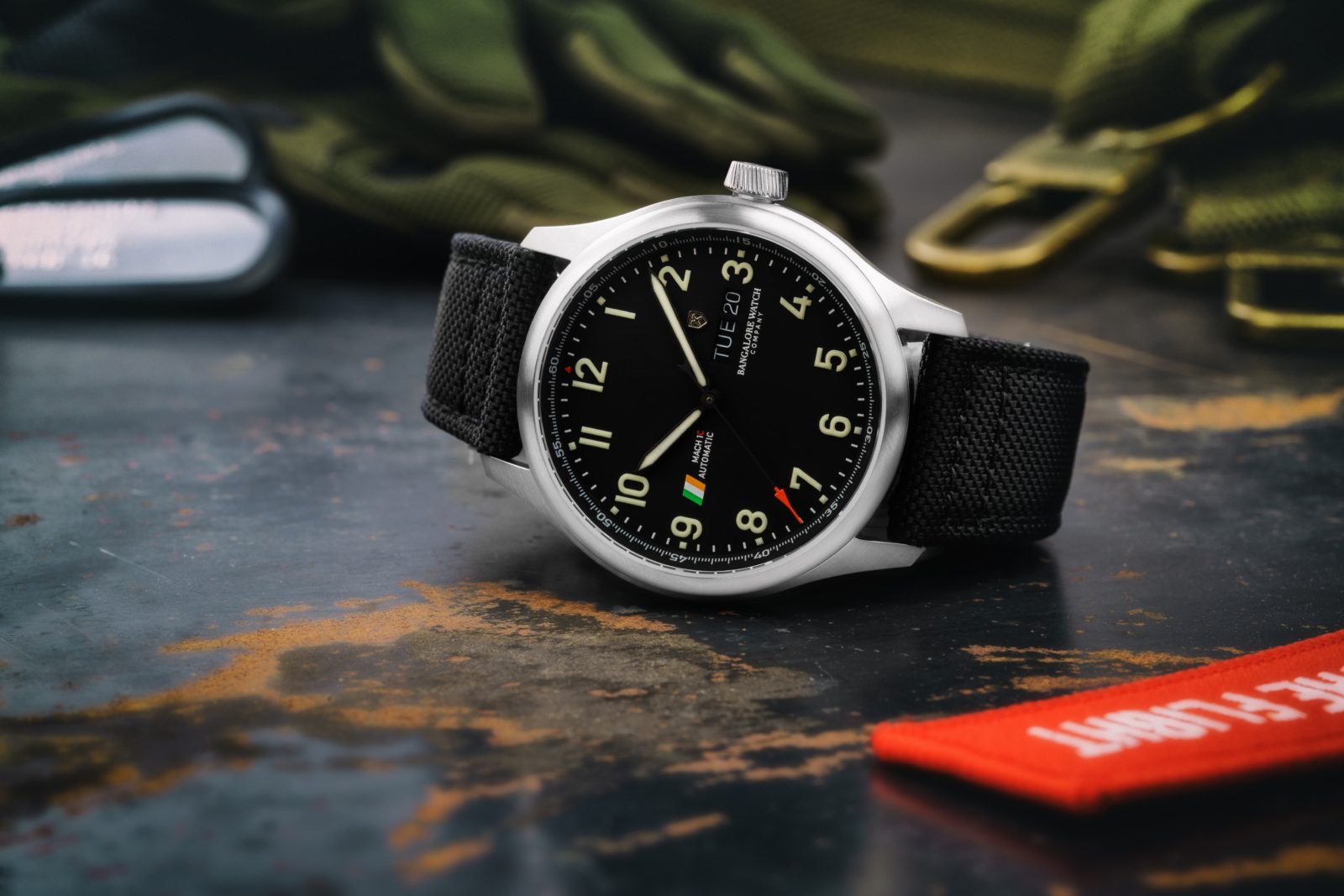 As the 2019 summer monsoon season in India just begun, I landed in southern city of Bangalore, expecting heavy rainfall. To the contrary, it was dry, so after freshening up, I hailed a cab to meet for lunch with Nirupesh Joshi and Mercy Amalraj, owners of Bangalore Watch Company (BWC). Nirupresh and Mercy are a young couple who left behind their IT consulting careers in Hong Kong and returned to India to revive watchmaking that tell stories from modern India. HMT, the legendary watch company which produced India’s first mechanical watch, shutdown operation few years ago. So, there was a void left to be filled with interesting mechanical watches from present-day India.

My first impression of BWC’s classic three-hand watch, resembling couple of Richemont brands, left much to be desired. However, after couple of rounds of dim sum, Nirupresh hands me a Peilcan case and says, “I think you will like what you will see inside.” As I flip open the box, I notice two pilot watches inside, which brought about a big smile. My eyes immediately went to the well laid-out dial, Indian Air Force fin-flash, and the unique crown. Watching my reaction, Nirupresh continued, “Our mission is to create collection of watches that tell stories with a 21st century world-view of India – a vibrant country with development in science, technology, space, and defense, as opposed to the dated, mainstream view.”

As I examined the two Mach 1 prototypes closely, I asked Nirupresh what lead him to a pilot watch instead of the path most watch companies take – classic watch is followed with a sports or dive watch. He responded, “I am a big aviation buff! So, we wanted to draw inspiration from the Indian Air Force for our pilot watch collection. This collection pays homage to India’s first supersonic fighter jet, a MiG 21 commissioned to be built by the Soviet during the 1950s and later built in India indigenously through technology transfer. The plane was originally supposed to play a light-interceptor role but over the past fifty years, the Indian Air Force has put the plane through its paces and almost pushed it to play an air-superiority role. All in all, a very dynamic fighter jet, and a very compelling story.”

MiG 21 FL Type 77 (NATO codename FISHBED) played a critical role in the Indian defense strategy in the early 1970’s. Type 77 primarily played a spot-interceptor role, but it eventually went on to create an air-superiority against the regional opponents. The MiG 21 Type 77 went on to serve the IAF for fifty years until retirement in 2013. Mach 1 watch pays tribute to the first supersonic fighter jet of the Indian Air Force.

Nirupresh and Mercy promised to send me the production version to try out a month later. As we said goodbye, I stepped outside to a heavy downpour of monsoon rain. If only I had listened to my wife to take a rain jacket for the trip……

Fast forward to couple of weeks ago, I received a package in mail from Nirupresh containing the production version of Mach 1C. There are two variations of the dials: Mach 1C (Civilian), which is a modern interpretation of “Type A” dial configuration. The second dial is Mach 1A (Airman), which has a modern interpretation of “Type B” dial configuration. Both Mach 1C and 1A are offered in stainless steel case, and PVD matte black case. I received the stainless-steel version. The watch arrived in a waterproof Pelican box, which comes in handy for carrying essentials while traveling.

The Mach 1C case size is 42mm, height is 11mm, and it measures 48mm lug-to-lug. It is proportionately balanced, and it wears small due to shorter lug-to-lug width. The brushed 316L case is of decent quality, with no visible flaws. It is reflective of a micro brand that must resort to negotiating MOQ (minimum order quantity) with a trustworthy Chinese case manufacturer, and fork over exorbitant tooling costs for making custom watch parts. As Nirupresh puts it, “We don’t use any catalog parts, all components are manufactured with tooling that is proprietary to us by some of the best manufacturers in the region. Hands are manufactured in Bangalore through a manufacturer that supplies to many Swiss brands like Breitling, Tag Heuer, Bell and Ross, Oris etc. So, nothing leaves our offices without our QC stamp! We bring all components into Bangalore for final assembly and QC.” It is a refreshing full disclosure from BWC.

The crown of Mach 1C is meant to be inspired from the nozzle of MiG’s afterburner. Interestingly, ridges on the crown make the pull and push operation much easier. The screwed-down crown give the pilot watch a respectable water-resistant rating of 100 meters. A sapphire crystal with triple anti-reflective coating provides excellent legibility of the dial. The case back has artwork portraying three MiGs in a V formation and text commemorating the MiG 21 Type 77.

The design of the dial is balanced and executed well. The day and date at 3 o’clock is offset by the Indian Air Force fin-flash at 9 o’clock. I like that there is no text on upper or lower half of the matte black dial. According to BWC, the long and narrow hands are inspired by MiG fuselage. The tricolor fin-flash, the tiny orange triangle at 12 o’clock, and the orange tip of the seconds hand inject some color into a monochromatic dial. At first the numbers appear to be raised, but after confirming with Nirupresh, they are printed 3D numbers filled with C3 SuperLuminova. The dial has a strong lume in the dark, comparable to my Stowa pilot watches.

BWC made an interesting choice to power Mach 1 with Sellita SW220-1 automatic movement. Sellita is now widely used by Swiss and German brands like Oris and Sinn. Micro brands in general opt for Seiko or Miyota movements, and while these movements are reliable, there is still some stigma attached to their use by watch enthusiasts. A newcomer like BWC made a smart move by selecting a Swiss movement to establish overall credibility, especially when you put it in context with a worthy design and story.

I wore the pilot watch for two weeks, and I almost managed to brake-in the fabric strap. The brown fabric strap has leather lining underneath which takes some time to break-in. I liked the quick-release spring-bar, so it will be easy to change to another 22mm strap. A black silicone strap, with quick-release, from Barton Watch Bands will be perfect.

This brings us to the question of pricing and availability. At first, I could not get a definitive response from Nirupresh about the pricing, only a ballpark. But as of now the price list has been published. The price of Mach 1 in stainless steel is $680, and in PVD case it is $730. While the question of value is debatable, it is certainly competitive with other pilot watches I get to review.  Mach 1 will be available for pre-order directly from BWC’s website on September 10th, and watches will be shipped out in November 2019.

This week BWC announced 21 pieces of Mach 1 Limited Edition, with dial made from parts of a decommissioned Indian Air Force mission flown MiG 21 Type 77 aircraft. BWC is collaborated with an aerospace company from Bangalore, who machined the recovered aircraft-grade aluminum to the dimensions required for the limited-edition watch dials.