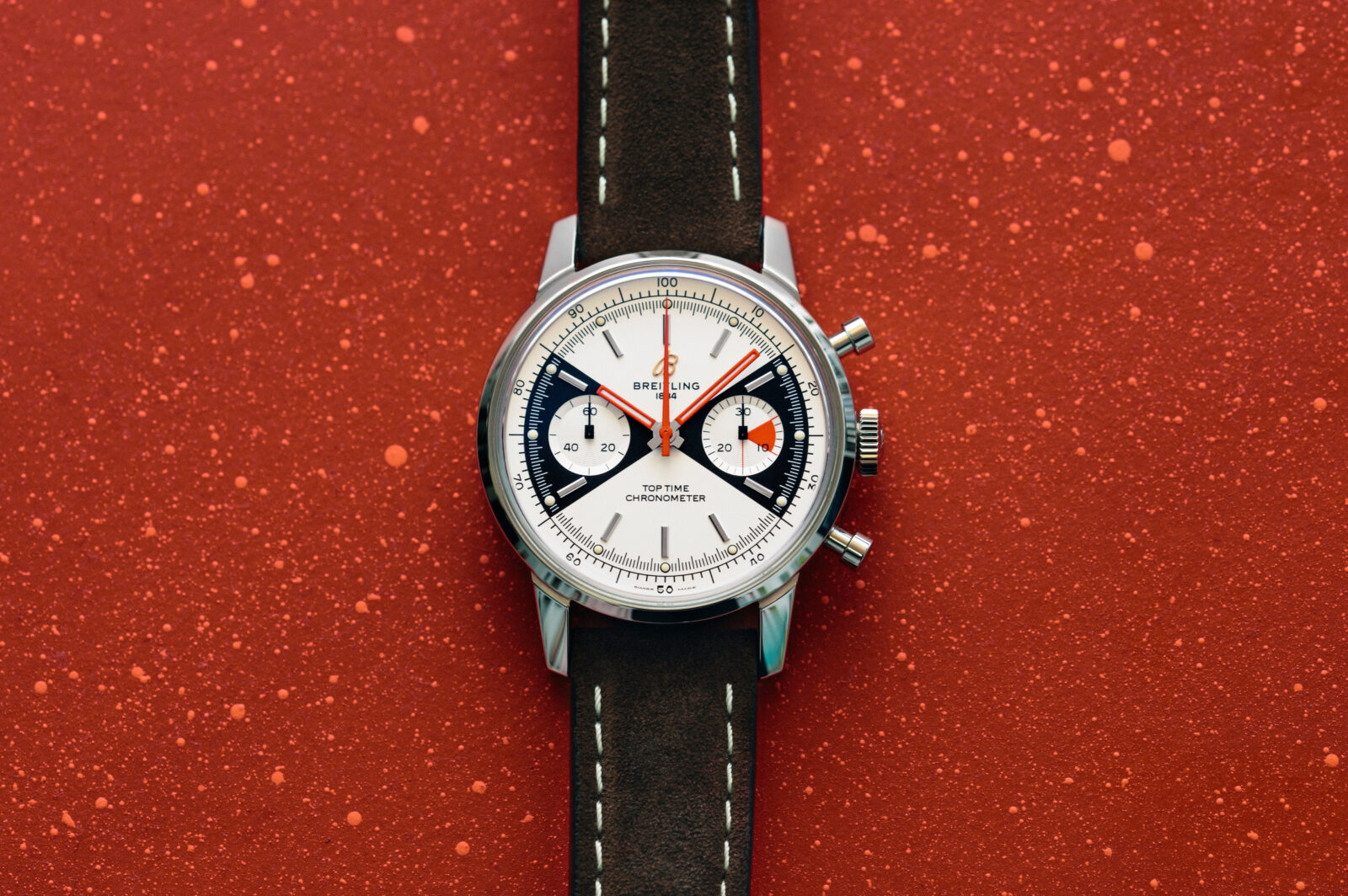 In past 12 months Breitling has announced three limited edition watches which take their cues from the 1950’s and 1960’s catalog. Top Time is their third watch, which is a tribute to their popular 1960’s entry-level chronograph, aimed towards the younger demographic. This limited edition is different from the previous two limited releases – it is not an exact replica of the original, and it is not marketed to Breitling collectors and purists. Breitling is targeting the Millennials, hence they have designed and packaged it as a colorful vintage-inspired chronograph.

Interestingly if you look in Breitling’s catalog from the late 1960’s, this specific dial, known as the “Zorro” dial (for the mask around the chronograph counters), has two references – Ref. 2003.4, which had gold plated case with square pushers, and Ref. 2001.5, which had a 18k gold case with square pushers. However, the same “Zorro” dial can be found on the Breitling Sprint model with Ref. 2010, which had a rotating bezel and round pushers. Both the chronographs featured a tachymeter scale on the dial. The design of the new limited edition incorporates elements from the above references except for the tachymeter scale.

Breitling CEO, Georges Kern, states “Breitling aficionados have always loved the Top Time’s dial. When it was released more than 50 years ago, it was a watch that appealed to a younger audience committed to enjoying the freedom and the spirit of the 1960s, and, amazingly, after all this time, it continues to stand out. The Top Time is an important but often-overlooked part of our heritage, and we know it’s going to resonate with men and women who love this blend of history, design, and great performance.” The key takeaway from Mr. Kern’s statement is that this watch is meant to appeal to Millennial professionals, men and women, who appreciate the retro colorful design, and understand Breitling has the credibility as an independent watch brand.

What makes Top Time Limited Edition a homage rather than a replica? Other than likeness of the “Zorro” dial, everything about this watch is modern. The polished stainless steel case has modern proportions with 41mm circumference, 14.27mm height, and elongated lugs. The round pushers and the crown are not screw-in, hence the water resistance rating is limited to 30 meters. Breitling and other blogs reference the importance of Top Time in the Bond movie Thunderball, starring Sean Connery. However, other than having the name in common, this reference has absolutely nothing in common with the made-for-movie chronograph. If Bond wore the current limited edition to an underwater dive for dismantling nuclear missiles, he would be standing at Q’s desk next morning, who in-turn would send it in for service.

The “Zorro” dial has a well-balanced layout, with a 30-minute counter at 3 o’clock (compared to the 45-minute counter on the original), and seconds counter at 9 o’clock. The red color hour, minute, and chronograph hands add the “Need for Speed” element to the dial. Dots at hour markers and the hands are coated with SuperLuminova. Unlike the original dial which had tachymeter scale, this watch has the decimal scale. Top Time chronographs from the 1960’s had either Venus or Valjoux movements, this modern Breitling is powered by modified Valjoux 7753 with COSC certification. The solid case back has engraving of “ONE OF 2000” for all the limited edition pieces. Breitling paired the watch with a nice brown Nubuck leather strap with white stitching. Top Time retail price is $4,990, and it is available now.