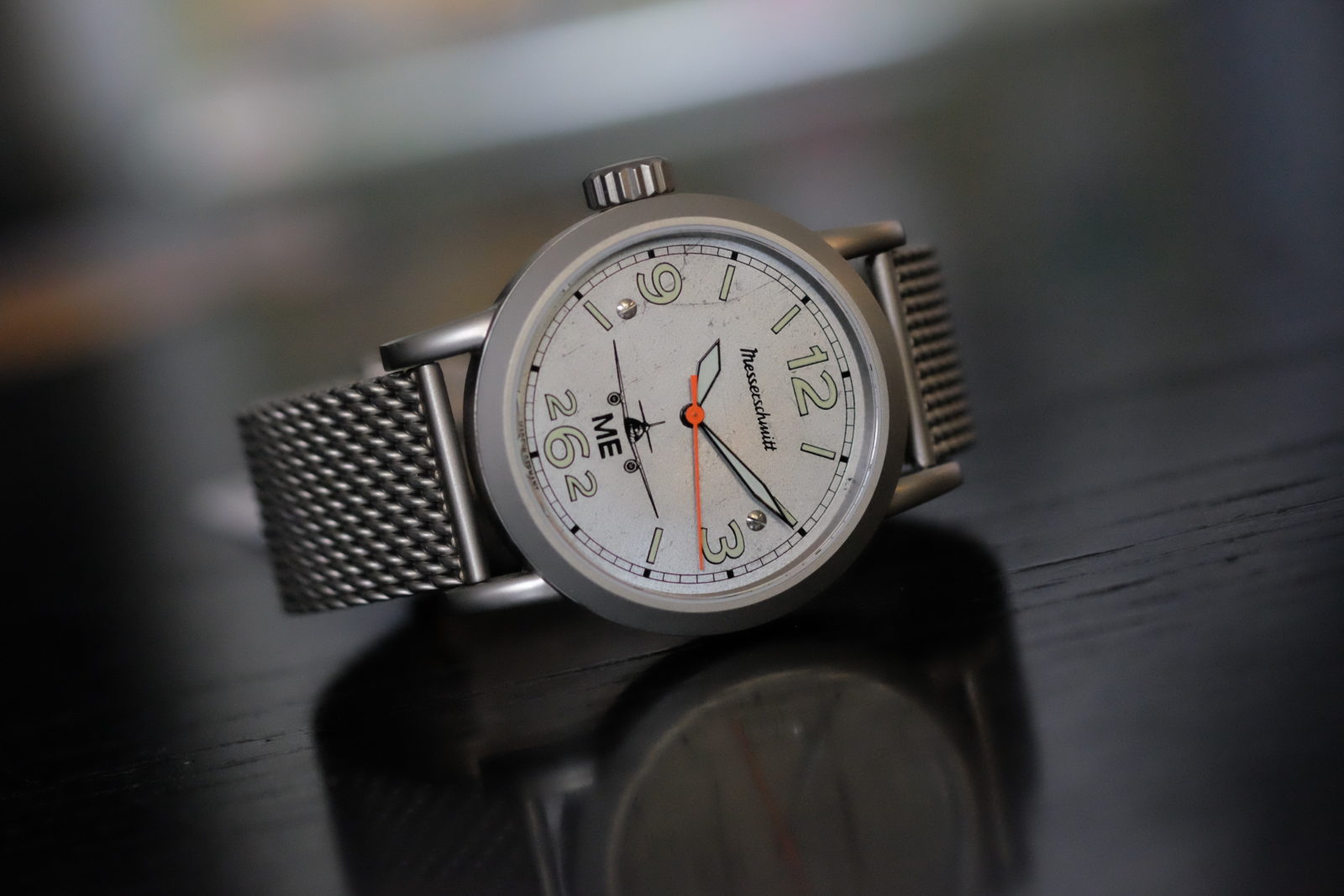 We recently reported on our visit to the Aristo Vollmer workshop in Pforzheim, Germany. Today we deep dive into an interesting limited edition pilot watch from Aristo, inspired by the Messerschmitt ME 262. Our focus remains strictly on highlighting the technological aspect of ME 262 fighter jet, and story behind the Aristo limited-edition watch.

ME 262 has the distinction of being the world’s first jet-engine fighter plane, designed by Professor Willi Messerschmitt. The fighter jet was used towards the end of WWII, in 1944. The jet was manufactured in two configurations – in fighter version with nickname of Schwalbe (German for Swallow), and in fighter-bomber version called Sturmvogel (German for Storm Bird). It was powered by Junkers Jumo 004, the world’s first production turbojet engine in operational use, and the first successful axial compressor turbojet engine. The jet fighter’s top speed was 870 km/h.

The ME 262 was retired at the end of WWII in 1945. However, it continued to be used until 1951 by the Czechoslovakian Air Force under the S-92 designation. After the end of the war, ME 262 was dissected by U.S and Russia, and influenced the manufacturing of modern jet fighters like F-86 Sabre and MiG-15. In total, there were just over 1,400 of these jets built. Many of them survived the war without much structural damage, and now they are displayed in various museums.

After WWII, for pragmatic reasons, commodities for civilian life were made from war machines. Steel helmets became saucepans, and cannon tubes became heating pipes. In February 2015, Hansjörg Vollmer, CEO of Aristo Vollmer, was approached by a boutique concept design firm called Aero1946, to see if Aristo was interested in using few remaining parts of a ME262 for a wrist watch. Aero1946 constructs everyday objects from parts of historical planes of the 1940’s. They make bar stools, cabinets, toolbox, bookshelf, and even wallets out of old plane’s scrap metal.

In the search for material that reflects the spirit of change after 1945, an Aero1946 employee in south of Munich, found a house covered with aircraft sheets. This house once belonged to the head of department of the factory where the Messerschmitt ME 262 was manufactured. After the war, he used the ME 262 sheets to repair the roof of his house.

An original ME 262 is displayed at the Deutsches Museum in Munich. The museum authenticated the Aero1946 sheets as original metal intended for use in the rear of the aircraft. These sheets are very corrosion resistant due to the high-quality aluminum coating. The production team of ME 262 had to solve the problem of an alloy with a melting point high enough to endure the high temperatures involved.

According to Hansjörg Vollmer, “After the caller (from Aero1946) sent us a sample of these sheets, we immediately bought the first components. Aero1946 had already used material from airplane classics for producing furniture and other design pieces. The Messerschmitt ME 262-Aero is now the only wristwatch which is fitted with original parts from the first German jet plane. “

Glauner GmbH, dial manufacturer based in Pforzheim, was consulted to provide their expertise since they had the know-how on how to work with “antique” material for a wristwatch. They had the challenge to align the 1mm thick aluminum sheet for a dial, which should not exceed 0.40 mm above ​​the surface of the movement. For flat rolling, the material was too brittle. After annealing it became wavy. A technician from Glauner found a solution by reducing the thickness of the dial only above ​​the movement.

There is just sufficient material to produce 262 pieces of the ME 262-Aero. As a result, this edition is limited and is numbered consecutively. The ME 262-Aero comes with a Vollmer in-house Milanaise bracelet, or a vintage leather strap with rivets. Vollmer is the other half of Aristo, and is well known supplier of mesh bracelets to several watch brands. The two variations are:
Reference: ME262-Aero (crown right) with retail price 590 Euros
Reference: ME262-Aero-L (crown left) with retail price 540 Euros
Just recently Aristo has released a third limited edition, ME 262 “Red B”.

Due to the patina and scratches on the metal plate of the dial, each dial is unique. The metal plate is affixed with two screws. While wearing it, I appreciated the fact that metal was left untreated with all the blemishes, to add character to the dial. On the dial is a silhouette of fighter jet, and just below is a clever incorporation of 6 into its model name. The numbers and hour markers have a faux vintage lume; the black hour and minute hands are filled with white lume; and seconds hand in orange complements the vintage lume on dial.

The case 44mm sandblasted steel but wears much smaller on my 6.5” wrist. The lugs are slightly curved, and measure 22mm. The large crown measures 9mm. ME 262 is powered by ETA 2824-2 automatic movement and can be seen through display case back. There is an engraved serial number on the case back. The limited-edition pilot watch is packaged in a leather box and contains a certificate of authenticity.